At PubNub, we believe in powering the global frontier of remote interactions. Whether it be the burgeoning paradigm of IoT, the global growth of chat apps, or the relentless expansion of online applications, our mission extends to Internet technologies of all shapes and sizes.

With our fully supported React SDK, developers now have the freedom of real-time web-app development at their fingertips.

In this article, we will show you just how easy it is to build real-time geolocation tracking with one of the most popular mobile app frameworks. Whether you want to build a rideshare app, on-demand delivery service, or a Pokemon Go game, this article aims to give you all the necessary tools and skills to get you on your way!

Today, we will be building a simple geolocation app that renders multiple users on a map view. Users will be able to toggle their location permissions as well as click a button to zoom the map on their location. And of course, it wouldn’t be PubNub if we didn’t include PubNub Presence to track how many users are currently online in the app.

Before jumping right into the code, be sure you sign up for a free PubNub account so we don’t run into any issues later.

In this section, we are going to install the necessary tools and dependencies to be able to simulate, run, and test our react-native application.

The first tool you’ll need to add to your set is Xcode. For Mac users, you can simply download Xcode for free in the app store. For PC users, you will need to simulate Mac OS with a Virtual Machine if you want to develop your app for iPhone. You can see how to do this here.

The next tool we’re going to install is Android Studio. This will allow you to develop your app for Android.

Next, you’re going to install the heart and soul of our app: React Native. This is an open-source platform developed by Facebook that has become very popular over the years. React Native allows developers to write their applications in one language across multiple platforms, which will make our job a lot easier for developing for iOS and Android.

To set up our React Native development environment, we’ll be using the React Native CLI, which will allow us to quickly install libraries, link packages, and simulate our app.

Assuming that you have Node 10+ installed, you can use npm to install the React Native CLI command line utility:

NOTE: You will be prompted to install CocoaPods after this installation. Say yes to this download and make sure you don’t run CocoaPods as root (i.e. make sure you installed react-native first using sudo and then you can use react-native as a normal user. CocoaPods then should run properly). Then run the following commands to create a new React Native project called “YourProject”:

To see if everything’s working properly, run this command to test your app with Xcode’s iPhone simulator:

If you’re having issues with the react-native run-ios command, try building the project in Xcode. Make sure to specify the Iphone X as the simulator.

The first library we are going to import and link is PubNub’s React SDK for handling data streaming. In your project directory, install the library with:

Open up your App.js file and import the libraries we installed earlier along with some basic React-Native components.

In the same App.js file initialize a constructor to pass in our props as well as initialize a PubNub instance.

As you can see, we first declare a PubNub instance variable with the Publish and Subscribe keys we were given when signing up for a free PubNub account. Then we initialized the PubNub instance at the end of the constructor.

NOTE: It is very important that the PubNub instance is initialized at the end of the constructor as the code will not work if done otherwise.

Now let’s create some state variables that we’ll need while our app is running. If you haven’t used state in React yet, it may be useful to read up about state in React Native before moving on.

While most the state variables seem fairly intuitive for a geotracking app, the users map requires further explanation.

The users map will facilitate how we render multiple users on our app. Each entry in the map will represent one user and will map to the specific in-app data that user contains (GPS coordinates, UUID, allowGPS, etc). We will then use PubNub to publish JSON data updates from each user to update the mapping and re-render the application’s state variables accordingly. You will see this in action in the later sections.

For example, if we want to update a user’s allowGPS variable, we publish a JSON object to update that user’s variable mapping: 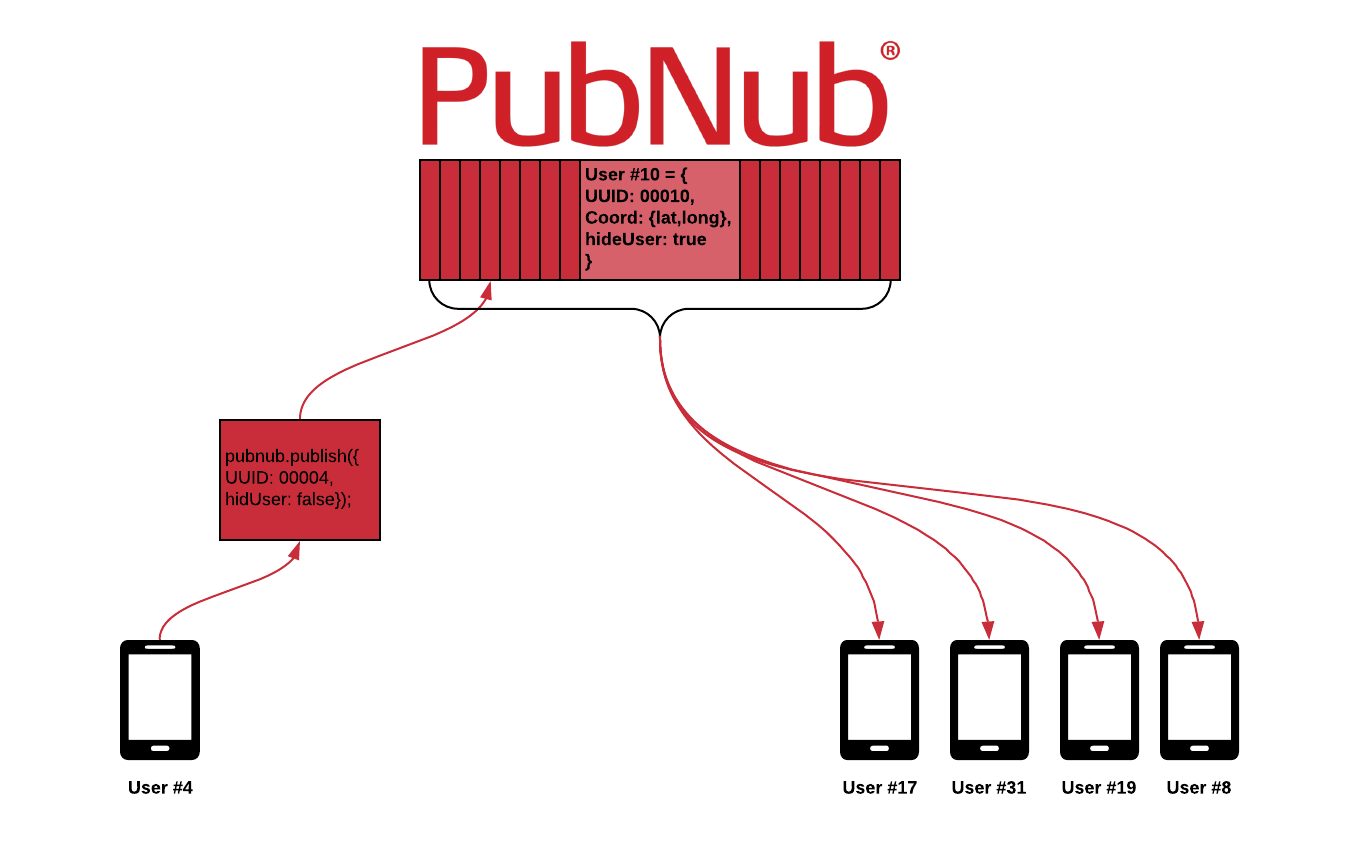 First, declare an asynchronous function in the ComponentDidMount().

In order to start receiving PubNub messages within our app, we must declare a PubNub event listener followed by a PubNub subscriber callback, specifying the channel like so: We’ll further implement this function as we later build upon our app.

We will now start implementing the interactive map for our users as well as track their GPS data.

To collect a user’s position, we implement the react-native-mapswatchPosition() function below our PubNub subscriber:

You should now begin to see the reasoning for our user map framework. After we collect the position coordinates, we publish the latitude and longitude data to the channel. The channel will later update this user’s location data based on the publisher’s UUID. Now just like any other map application, we should add a function to center the map on the user’s location if a button is pressed. To add this functionality, add this function implementation. When called, this function will center the map’s viewing region on the user’s current location.Lastly, if we want the user to have the ability to turn off their GPS location, we need to toggle the allowGPS state. To do this, also add this function to your code.

Now, let’s go back to the PubNub event listener we defined earlier. The purpose of the event listener for this app is to take the data updates published to our channel and update the state variables of our app accordingly.

In order to update the users map, we’ll first initialize a copy of the mapping to manipulate:

We then check if the incoming message is a request from a user to hide their GPS data and remove them from the mapping accordingly. Otherwise, the message contains data updates for a user and we must declare a new user (with the updated values) to replace the old one. We just implemented the receiving end of updating a user’s data. Now we shall implement the sending end where the user will actually publish messages with their data updates.

In order to know when a user has changed one of their data variables, we must use an event handler to detect these changes. For this we will use React’s componentDidUpdate() function, which will trigger anytime there is a change in the app’s data.

We first specify the componentDidUpdate() function to pass in the previous props and state.

Within this function, we then check whether the user has toggled their allowGPS and focusOnMe variables and make the necessary changes to the app’s function and state. For those of you who are paying close attention to what we are doing here, you may have noticed a redundancy in this code snippet. Why are we setting the state of the updated user locally and then publishing the updated user object to the channel? Isn’t that setting the state twice?

While the assumption is correct, there is a method to the madness. We first update the state locally so we can update the user’s screen as fast as possible for accurate location tracking. Then we publish the updated user object to the channel so that everyone else on the network can update their state as well.

It’s time to watch our real-timelocation tracking app beautifully come together! We’ll now be working in the render() function of our App.js file. As we incrementally build upon components in this section, be sure to look out for these comments:

…as they will direct you where to insert the next piece of code.Let’s first declare our user map into a useable array. Now inside your return, render your map component from React-Native-Maps by setting the initial region to whatever coordinates you want. We shall now iterate through our map to begin rendering every user on our network. For each user, we must render a marker component from React-Native-Maps as well as an image to represent that user. Below the MapView, we can define a toggle switch for the user to toggle their allowGPS state. Lastly, we can add a button to center the map on the user.

Of course, you may style your components however you like, but here’s a simple template I used for this project:

For Android OS compatibility, place this snippet at the beginning of your setUpApp() function:

then place an if() statement around the watchPosition() function like so

When you’re all good and ready you can simulate your app with either:

Congratulations! You have created your very own real-time geolocation app in React Native! Feel free to send us any of your questions, concerns, or comments at devrel@pubnub.com.

If you’re still hungry for more PubNub React Native app content, here are some other articles that you may be interested in: