We brought 24 demo Tessels for the MIT students and faculty to hack on. Tessel is an IoT microcontroller that runs Lua, transpiled from JavaScript. 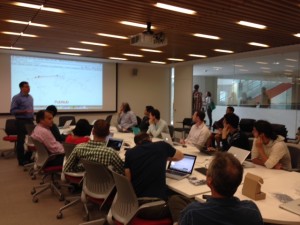 PubNub CEO Todd Greene and evangelist Dave Nugent gave a hands-on workshop showcasing PubNub to the faculty and students of the MIT Media Lab, at the invitation of Media Lab Director of Computing Michail Bletsas.

Greene gave a brief overview of how the PubNub platform helps companies of all sizes build out their Internet of Things offerings using PubNub Presence, PubNub Storage and Playback and PubNub Access Manager. These features, which are built into the PubNub platform, allow developers, artists and other hackers to build out more of their project on PubNub’s scalable cloud service, decreasing latency and and increasing reliability.

Greene also discussed the different ways to connect the Internet of Things with PubNub, such as the way partners Ford, Revolv and Get Taxi are using PubNub to improve the reliability of their home automation and connected car IoT products.

Thanks to the team at Technical Machine, we were able to bring two dozen demo Tessels for the students and faculty to hack on. Tessel is a small, powerful microcontroller that runs Lua, transpiled from JavaScript. Each Tessel also includes built-in WiFi, so internet-enabled JavaScript programs can be run directly from the device. This combination of WiFi and JavaScript means that Tessel works great with PubNub! For a detailed rundown of the integration, see PubNub and Tessel Power the Internet of Things in 4 Lines of JavaScript.

By the end of the workshop, students and faculty had built demo apps using Tessel and PubNub, causing LEDs to blink, servos to spin and temperature sensors to publish their data as a PubNub data stream. At least two teams were able to send data over PubNub using Tessel’s RFID and Ambient modules.

We at PubNub are excited to see what the Media Lab members will develop with PubNub as a part of their infrastructure! 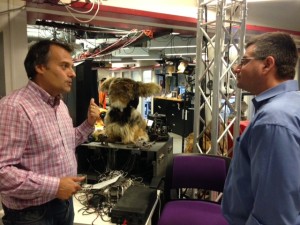 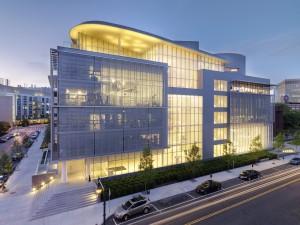 The MIT Media Lab encourages unconventional mixing of disparate research areas. It creates disruptive technologies, pioneering such areas as wearable computing, tangible interfaces, and affective computing. A list of their projects is available here. A big thank you to Michail Bletsas and the rest of the Media Lab for facilitating this workshop.