Internet of Things Expected to Quadruple in Size by 2020

The Internet of Things is exploding. And by 2020, it's expected to grow to quadruple the amount of connected devices.

The Internet of Things has certainly transcended beyond its state of infancy and is well on its way of gaining momentum, according to Verizon at least. In its latest findings, the carrier revealed that more than a billion devices are already connected and running business-to-business IoT operations.

In its “State of the Market” report, Verizon published that there were 1.2 billion various smart devices, and that the number is expected to rise to 5.4 billion by 2020 for an annual growth rate of 28%.

“It’s not hype. The Internet of Things is already having a massive impact on business. It offers organizations the opportunity to transform how they operate, and gives both new entrants and established players the ability to innovate and disrupt,” the company writes. “Adoption is growing rapidly, but IoT isn’t yet widespread. Whether you’re in the public sector or private; big or small — if you don’t have an IoT strategy, you should.”

Verizon experienced a 45% year-over-year revenue growth in its IoT business in 2014, with 4G LTE activations growing by 135%. Currently, the telecom manages more than 15 million IoT-enabled connections for a wide range of industries. To date, company experts estimate that just 10% of enterprises have deployed IoT technologies extensively, however research commissioned by Verizon from ABI Research forecasts massive growth ahead, with the number of business-to-business IoT connections more than quadrupling over the next five years.

Additionally, the global communications company also cites ABI Research in its revelations that organizations will introduce more than 13 million health and fitness tracking devices to the enterprise by 2018. In doing so, wearables can enhance wellness throughout the workplace, not to mention improve efficiency in hospitals and reduce the cost of healthcare. 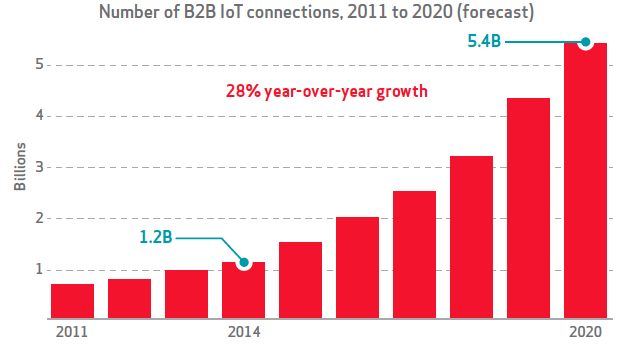 Among those who use Verizon’s services, manufacturing has seen the biggest increase in machine-to-machine operations, with a 204% increase year-over-year. It’s followed by finance and insurance with a 128% increase, and media and entertainment, which has experience an uptick of 120%. Home monitoring and hospitality weren’t too far beyond with 89% and 88% jumps, respectively. Verizon data also shows an 83% YoY growth in IoT in the transportation and distribution sector as well.

In fact, Verizon’s telematics experts note that 14 car manufacturers account for 80% of the worldwide automotive market, and all of them have a connected car strategy. The report predicts that by 2025, at least five countries will have set a “zero road fatalities” target, relying on intelligent connected cars and smart road infrastructure to avoid and mitigate accidents.

Verizon analysts add that in 10 years, smart cities capabilities will become a critical consideration for companies deciding where to invest and open facilities, due to their impact on operating costs and talent availability. Recent data already shows a 46% YoY growth in the number of IoT connections in the public sector.

According to the report, IoT growth is being fueled by a mix of technological, political and social factors which are driving more organizations to adopt IoT-enabled solutions. For example, use of social media and mobile technology has transformed consumer and citizen expectations, while the declining cost of sensors, connectivity, and data processing power is making the ROI equations for IoT projects look even more appealing.

The carrier went on to highlight ever-growing security concerns for a constantly-connected world as well by noting, “In a mature IoT world, there will be millions of intelligent endpoints, such as cars, pacemakers, and aircon units, each equipped with dozens of active sensors and millions of lines of code. Many of these endpoints will be accessible, often physically, to hackers. The network connections that these endpoints use to communicate may also be vulnerable, giving access to central applications and databases.”

This is a guest post from Atmel, and was originally published to the Atmel blog on March 2nd, 2015. Atmel Corporation is a worldwide leader in the design and manufacture of microcontrollers, capacitive touch solutions, advanced logic, mixed-signal, nonvolatile memory and radio frequency (RF) components.

With the Internet of Things continuous explosion, how the heck are we going to actually connect such a massive quantity of devices, while ensuring speed, reliability, and especially security. For IoT developers, PubNub has a wide variety of real-time SDKs for any IoT project, and a globally distributed network with 14 points of presence, enabling developers to connect and communicate between millions of devices at any scale.