In this tutorial, we’ll cover advanced channel groups, and show you how to build efficient real-time buddy lists (ie. friend lists) for web and mobile chat applications. The buddy list monitors user status, and updates based on any changes in online/offline status in real time.

What are Channel Groups?

The essential feature required to implement this functionality is the “Channel Group” feature, which can also be thought of as a “Subscribe Group.” The first concept to understand is what a Channel Group does. It groups channels into a persistent collection of channels that you can modify dynamically, and it allows you to subscribe to all these channels by simply subscribing to the group.

It’s this multiplexing magic that allows for creating Friend Lists and Status Feeds.

All Presence features use the UUID that is set on PubNub client initialization for tracking of that client, which typically is the user. While it’s called a UUID, it doesn’t have to follow the standard UUID format at all, it’s a freeform string. The only real requirement (also not enforced), is that it’s unique.

It’s recommended to actually combine a unique identifier with the platform as well for instance:

If you don’t supply your own UUID to PubNub init, one will be generated, but it may not be reused or saved (depending on the platform), so you will want to set your own. Again, it can follow any format you want.

Every user will need two channels: 1) a channel they publish to for their own status messages, 2) a channel they subscribe to to indicate they are online. They will be unique for each user. For convenience, we will use user-[letter], like user-a or user-b, as the unique identifier. 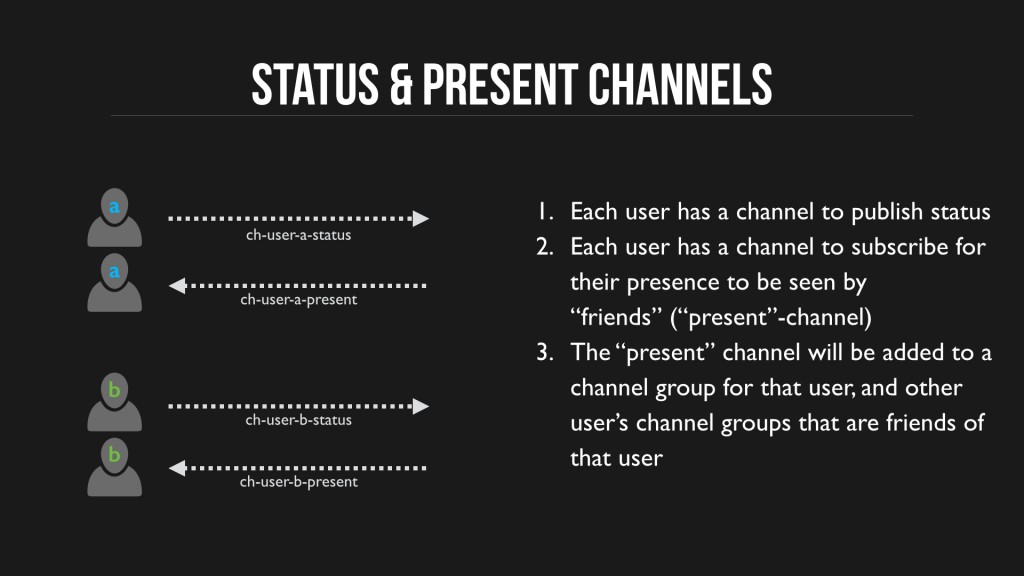 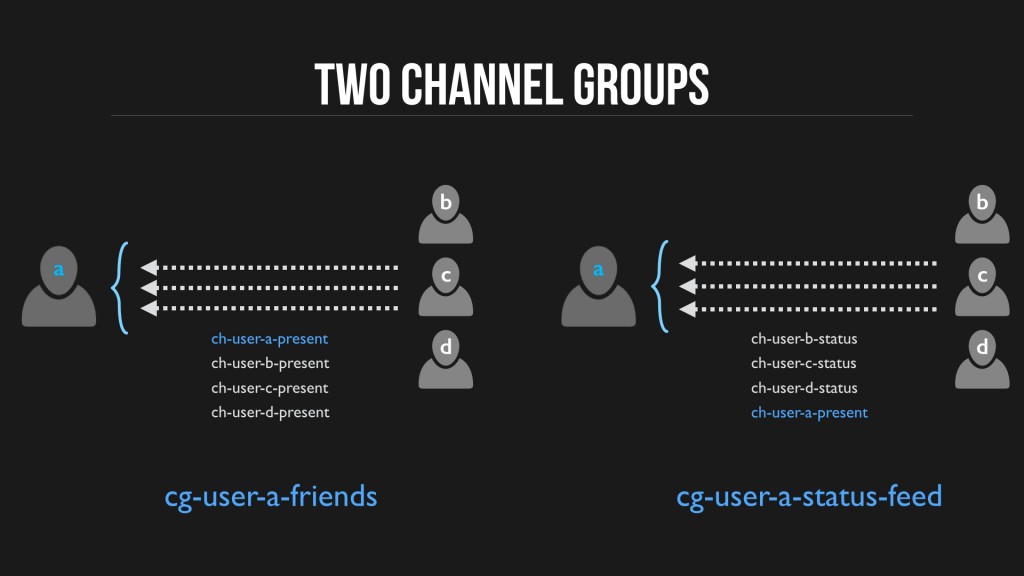 Creating channel groups requires you to add at least one channel to the group. This means that when you set up a user. The easiest way to do this is to simply add the “present” channel to each group. The example is in Javascript, but typically you call these API methods from your backend server when a user registers for an account.

Again, this is in Javascript, but you will want to call these API methods from your backend server when you receive a REST request that two users are friending each other. 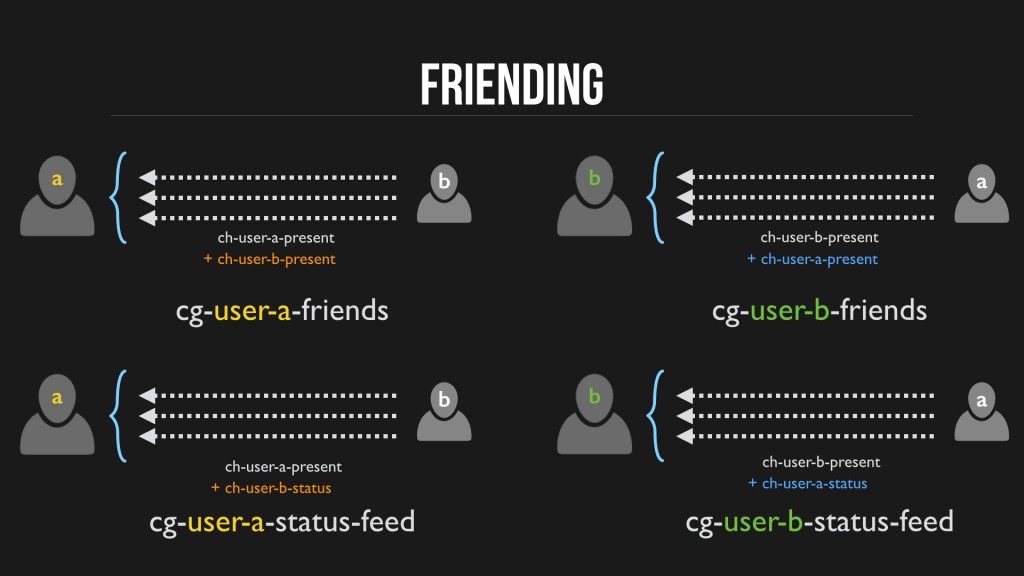 Now to see these working, it comes to how you subscribe. What’s a bit different here is that you will subscribe to one group for messages (status-feed) but subscribe to the other groups’s Presence Event channel for the online/offline status (friends).

And for each event, we also include the UUID and the channel occupancy (how many subscribers).

The reason you don’t want to subscribe directly to the group is because Channel Groups are “Subscribe” groups, and therefore you would inadvertently subscribe to all that users’ friends’ “present” channels! We are only interested in the Presence Events in this group. 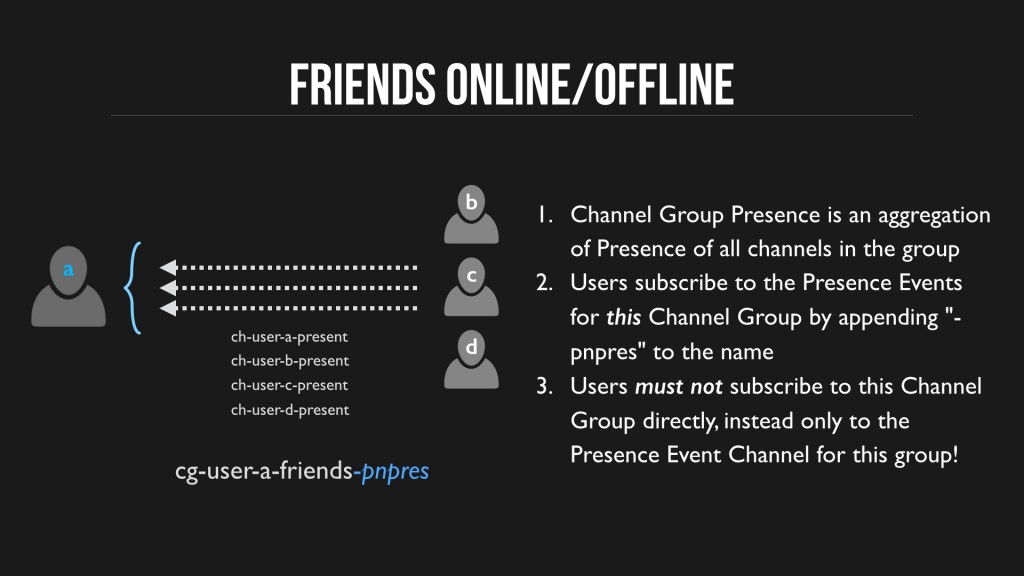 The status-feed channel group is much more straightforward, you are going to subscribe directly to the channel group and you will receive status updates in real time via each channel in the group. 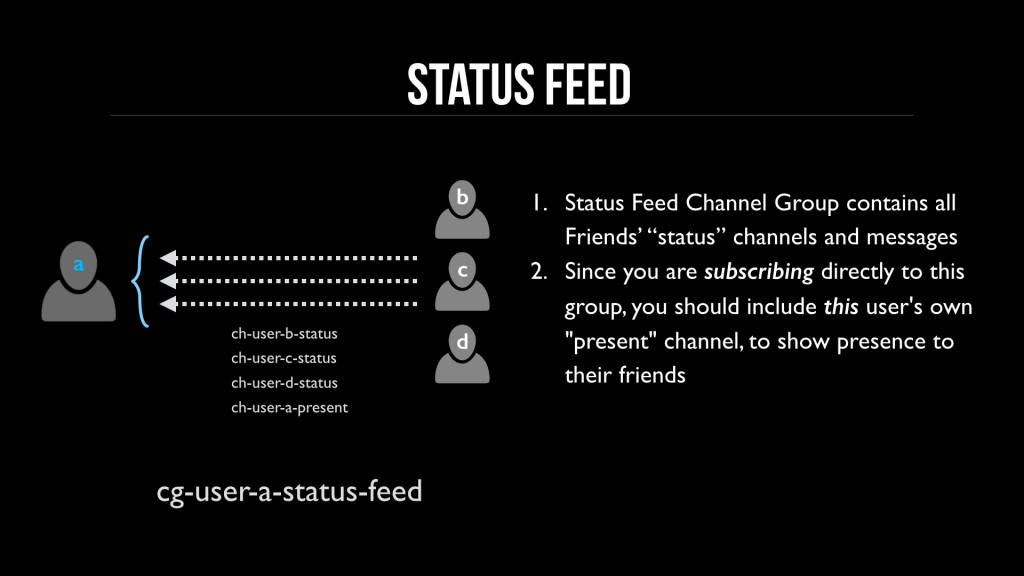 Since we include the “present” channel for this user in the channel group (ch-user-a-present), this also has the net effect of subscribing to that channel, it also means it generates a JOIN event for every channel group that includes this user’s present channel. So, if User B is friends with User A, when User A subscribes to this status-feed channel group, it also subscribes to User A’s present channel and generates that JOIN event, as well as all the other Presence events.

NOTE: If you implementing only the Friend List and not the Status Feed, User A will need to subscribe to this ch-user-a-present channel directly since User A isn’t subscribing to the status feed group which includes this channel.

Simple and powerful buddy lists are fairly easy to do with PubNub! I’d argue it’s even easier than trying to develop a full backend to support the Presence and Status Feeds, and on top of that, it’s real-time. Can’t be beat! 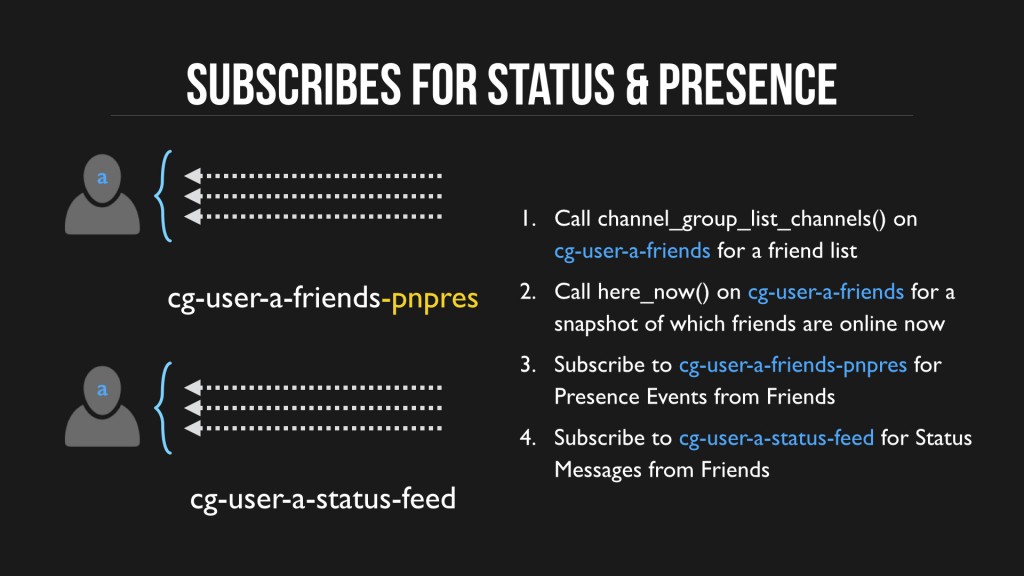 Lastly is retrieving history of status messages can be a bit more work as you have to retrieve messages from each channel in the group individually (each friend) and mash/sort them together client side. I’ll make another post on how to do that, and a little bit of code that can handle it at least semi-auto-magically.

For every decision there is a counter-decision, and for every idea there is a more complex version. I’ll throw in a few caveats to this implementation, there are some interesting ways of changing Status Feeds that can make things a bit trickier, one is “weighting” the status message, so that it’s no longer chronological, but rather based on interests, or activity, or other things. Another layer of complexity that you can add is commenting on status items.

Again, it requires a bit more logic here, and it might not be the simplest thing to do, but it depends on how you want it to work. It’s certainly quite possible, but not quite as easy as the above.