Welcome to part 2 of this Air Traffic Control React Native game blog series. In part 1, coding a real-time airport application with Node.js, we discussed the overall roadmap of the series and created a simple server-side application using Node.js.

Our ATC app will need to provide:

To create the UI, we will be using React, React Native and Expo.

To manage game events and the state of the game we will be using PubNub and Redux.

The technologies we will be using are all summarized below, don’t worry if you haven’t used them before!

React, Redux, PubNub… What Are These?

React is a JavaScript framework for building user interfaces. One of the main motivations for using this framework is that it promotes a hierarchical, component-based architecture. This naturally compartmentalizes projects in a way that promotes reusability and logical separation. It also allows the framework to do more performant rendering by only updating components that change over time. React uses JSX (a syntax extension to JavaScript) which can look a little odd at first, however it’s fairly straightforward. The React documentation introduces this syntax nicely and has additional information if you want to learn more about React.

React components, when used in a web environment, will compile into HTML. React Native, by contrast, will compile differently depending on the platform to which it is being deployed. For example, a React  View component could become an iOS UIView class, a HTML <div> element or an Android view class depending on the platform the application is running on. It also includes some platform-specific components if needed.

Expo allows us to easily deploy our code to real or emulated devices. This makes it easy to test our app on a variety of different platforms. Another handy feature of Expo is that it allows us to do live reloading. This means that once we deploy our code to a web browser or smartphone, the app will be updated straight away if we make a change in our code. This can be particularly useful when tinkering with UI changes!

Each React component can store its own state. This could be used for something elaborate or simply to store whether a checkbox is checked or not. As applications grow and get more complicated, it’s typical to encounter situations where a change in one component’s state affects the state of several others. The primary motivation of Redux is to make it simpler to determine what is going on inside our app and to better manage state in applications as they become more complex.

Rather than having each component try to modify each other’s state in strange and convoluted ways, Redux introduces the idea of an application-wide state. Detached from any one component, it uses actions and reducers to alter it. This means that, rather than modifying state directly, a component fires an action which a reducer will then receive. The reducer will be the sole modifier of a particular part of the application state and will update the state based on the action fired.

PubNub allows us to connect devices with minimal setup by hosting all of our communication architecture. We can simply hook our applications up to the network and then we send messages between devices all over the world in real time. It offers numerous features beyond message transfer but we will, at least in this post, only be focusing on its publish/subscribe functionality to instantly relay game data between our client and server applications.

This guide assumes that you have read and followed the setup steps covered in part 1, coding a real-time airport application with Node.js, of this series. To recap, you should have:

We will walk through the remaining setup steps for our React Native development environment next.

Setting up the development environment

We first need to install the Expo command-line interface NPM package so we can create and run our project.

With Expo running, you can view the blank template app using one of the methods below:

Once you have confirmed Expo has been installed correctly, we can add our other packages. For this application, we will be using the PubNub and ESLint dependencies. The pubnub package will be used for our communications with PubNub whilst eslint is used to keep our code adhering to recommended style guidelines and coding standards. Our 3rd party dependencies can be installed with npm install --save pubnub and  npm install --save-dev eslint.

You should now find a directory with the 3rd party code and a package.json file. The information you entered during setup will be contained here.

If you want to fully understand how the state of components are managed in React and Redux, then their respective guides are a great place to learn. However, below are a few key concepts that are helpful to know for this guide:

The following files are responsible for the data workflow in our application:

In our application we have three actions:

As you can see, all our action creator functions return an object with the action type and action data.

To understand reducers more fully, I would highly recommend reading the Redux Reducers Basics page. However, to summarize, for each top-level state property, an associated reducer should be created to manage that portion of the state. When an action is received, the reducers will be called with the action object (defined above) and the previous state. The action “type” property can be used to determine what, if anything, each reducer needs to do. Each relevant reducer will then determine the new value of their portion of the state based on the action and previous state.

Taking the ‘plane selected’ action as an example, we can see that the default state is set to be an empty string. When a plane is selected and a plane selection action received, the action type should match the switch statement’s case within the reducer. The reducer function then returns the plane name as the new state for the “selectedPlane” state property.

The store is also passed to a Provider Redux React component which contains the rest of the application to be rendered. this allows all nested components to connect to the Redux store.

This file is very similar to the broadcaster in the previous blog post. One difference, however, is that our channel listeners now trigger actions.

Now that we have our store, our actions, our reducers and something that dispatches actions, we just need to read from the store! The following code snippet highlights the relevant parts of the code which connects to the Redux store and updates our component with state properties mapped to the components ‘props’.

The above GIF provides a visual breakdown of how the different React components contribute to the UI. We will go through the key concepts, design decisions and review some code snippets below. You can find the complete code for each of these files in my React Native ATC Game GitHub repository.

Our React Native interface is made from 10 components and therefore 10 files:

We have already discussed App.js so let’s look at the rest of the component hierarchy. Visualizing this hierarchy makes it easier for us to understand how data is passed from parent to child. 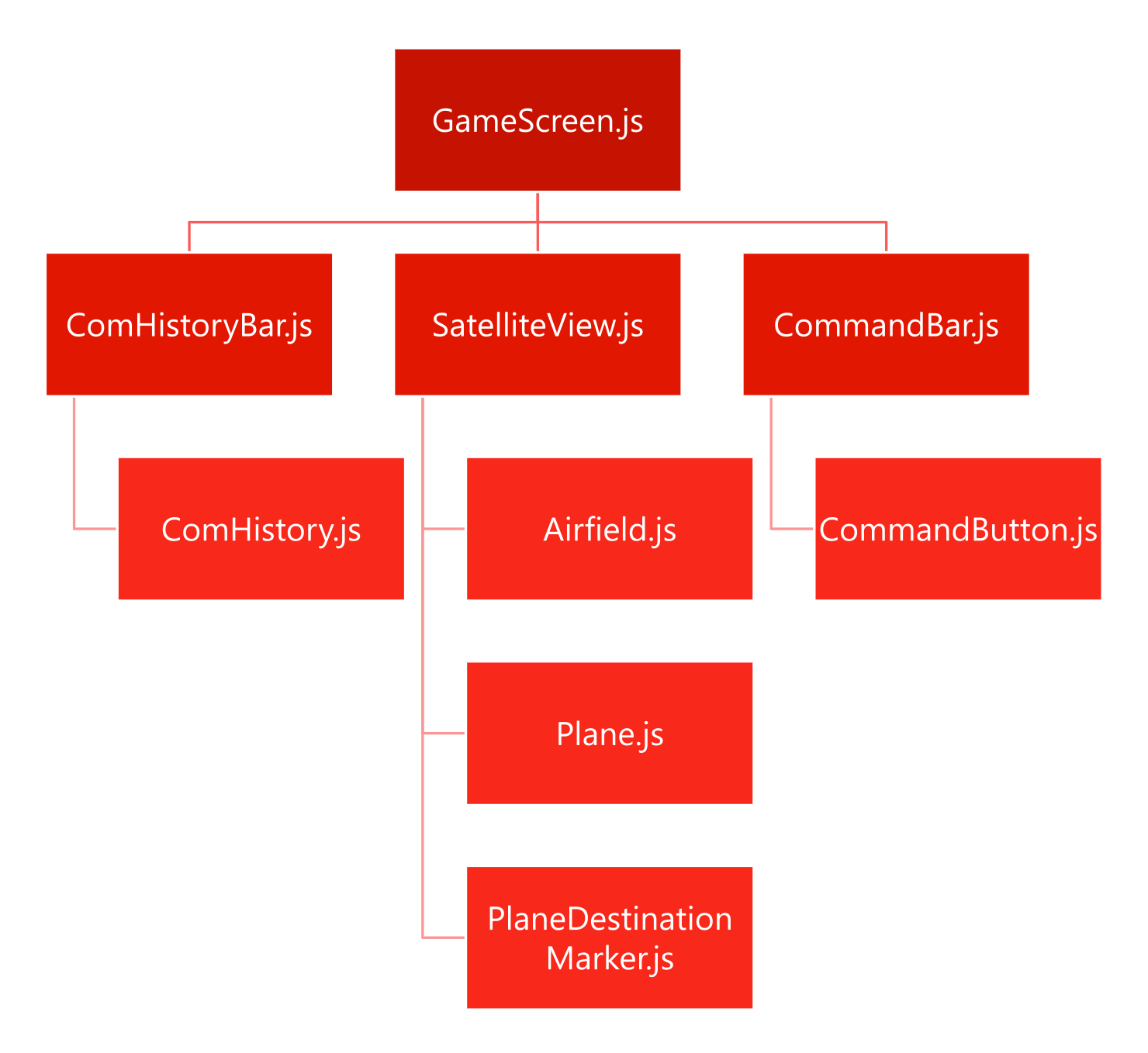 We have already seen that GameScreen is responsible for connecting to our Redux store. It is also responsible for passing relevant parts of this data to child components.

The CommandBar is told whether a plane is currently selected, whether the plane (if selected) is on the final approach and is also given a function to call when a command is issued.

Side note –  The passing of functions is a common design pattern in JavaScript that might be unfamiliar to you. Why do we do this? Passing functions allows us to keep child components generic. Child components don’t have to know what the passed function does, just to simply call it at the relevant time. It’s the job of the parent component to pass the appropriate functions to the different child instances.

Airfield consists of styling only. It is responsible for rendering the runway and flight pattern.

The Plane component is responsible for drawing a single plane. All the information about the plane it represents is passed to it, including whether it is already selected. The function to call if it is selected is passed also. The component renders the plane’s name, the plane’s fuel level and a marker at the plane’s current position. The appearance of the plane changes if it is currently selected.

The application can be started by running expo start

Refer back to “Setting up the development environment” above to see the different ways to view the app with Expo.

The game should now be running on your chosen device or emulator. Simply start the game server we created in part 1 and planes appear on our screens.

Landing them is in your hands now!

Next Steps for Making a Multiplayer React Native Game

We have now reached the conclusion of part 2, having made both our airport server and ATC app fully operational! Although we now have a working game, there is more to do! In the next part, using TypeScript and PubNub Presence, we will be making our ATC app code more robust by switching to TypeScript. We will also explore PubNub Presence to enhance gameplay with multiple players!