Organizations that deploy cognitive services will work more efficiently, safely, and sustainably, and deliver more engaging and immersive experiences to their customers.

Cognitive services enable applications to evolve and adapt rather than simply following prewritten rules. They augment and expand human capabilities, allowing us to do our jobs faster, more efficiently, and more sustainably.

Cognitive computing doesn’t aim to replace the human element but to extend human capabilities. Humans can think deeply and use reason to solve complex problems, but we lack the ability to analyze and process massive amounts of data. That’s where computers excel. Cognitive computing era makes the most of both strengths: the human’s and the machine’s.

As cognitive systems solve complex problems, they improve their efficiency and accuracy building and acting upon sophisticated pattern recognition models. These systems aren’t explicitly programmed to work in a fully prescribed way but to naturally interact with human data inputs, then learn and grow based on the data they accumulate.

Big players like Watson, AWS, and Microsoft, as well as fast-moving startups like SiftNinja and Clarifai, have released a massive number of cognitive services, delivering them through APIs that make them a snap to fold into new applications.

The Impact of Cognitive Services

With the vast amounts of data and information they have at their disposal, applications can use cognitive services to find patterns, insights, and connections that the hardest-working human might never identify. And having found patterns once, they can create new and unanticipated ways to adapt and grow, making discovery a more accurate and efficient proposition.

Cognitive services empower businesses to see, hear, speak, understand, and interpret natural language and information sets, enabling them to create new, engaging experiences for users, customers and themselves. By understanding and responding to the ways users interact with apps and each other, cognitive systems are changing the way humans and systems interact.

The most challenging but potentially revolutionary impact of cognitive services is on the decision-making process. Intelligent systems can rapidly weigh evidence and analyze information, then make a decision based on data, not hunches. They can consider and act on complex sets of information — something as simple as recommending a product on an e-commerce site or as complex as optimizing smart devices in an industrial setting.

The Rise of Cognitive Business

Organizations that deploy cognitive services will work more efficiently, safely, and sustainably, and deliver more engaging and immersive experiences to their customers. From the way we buy goods to the way our children learn to the food that we eat, they will drive the innovation of industries and organizations into the future.

The question is, How can you get started implementing dynamic cognitive services into your business today? To start, look at a couple things:

With answers in hand, you’ll be ready to explore the vast range of cognitive services at your fingertips and discover how they can transform your business.

Intelligence at the Edge: Event-Driven Architecture

Cognitive services are quickly changing applications and the businesses that deploy them. Using APIs from companies like IBM, AWS, and Microsoft, developers can leverage some of the world’s most sophisticated technology for computer vision, translation, sentiment analysis, and much more with just a few lines of code.

To get the most out of cognitive services, many developers are adopting a design pattern called event-driven architecture.

As the name suggests, event-driven architecture makes software change its behavior in response to events in real-time. Event-driven architecture is different from traditional request-response architectures such as REST in that an event-driven system broadcasts a notification when a predefined event occurs rather than following along a set path of subsequent subroutines. This notification may be picked up by any number of other systems, whose use of the information is decoupled from the original event. It’s a way to create faster, more dynamic, more distributed, and independent applications, allowing you to trigger and execute business logic at the edge, with each system informed by, but not necessarily reliant upon, the next.

What Is the Connection With Cognitive Services?

The event-driven design pattern provides a fast and efficient way to carry out cognitive tasks. Instead of sending all your data to an external server, having that server parse the data, and figuring out what action to take, it applies basic business logic while the data is in motion, directly in your network, and can decide whether to involve back-end processes. This way, you aren’t wasting valuable bandwidth or computational power sending data that never needed to travel back to home base for processing.

As a result, it becomes possible to build powerful cognitive applications right where the intelligence is applied: at the edge of the network.

Because cognitive services are delivered as discrete components, you can add them via serverless microservices and process data in real-time without the need for ingestion by a centralized data center unless it is truly necessary.

Let’s take one example. Say a beverage company called Yummy Cola is launching a new line of flavored colas leading up to, and during, this year’s Super Bowl. It wants to monitor brand reaction through social media channels but knows the #superbowl hashtag will be incredibly busy with game analysis and the activity of other brands. It needs a way to filter their brand mentions and gauge the sentiment of how users feel about their product launch.

To do this at scale would cost a fortune, and without an event-driven architecture, sending every user’s message to a central server or data center to process and analyze would be incredibly slow. An event-driven system will be much more efficient, using cognitive services to carry out basic business logic at the edge.

In this way, the brand can monitor each message, determine whether it refers to the new colas, parse the sentiment of the relevant ones, and only pass the relevant information to the back end.

To do this, it could deploy edge computing resources to filter the messages with a natural language processing service, identifying which messages mentioned the brand and which were unrelated. From there, it could use a different cognitive service to analyze people’s feelings about the different colas. It could even publish the popularity of the different products. And it could do all this without bringing the back-end servers into play.

Architecture for the Edge — and Beyond

RESTful architectures were well-suited to an earlier, simpler generation of web applications. Modern applications demand a different approach, with their dense mesh of microservices, edge-computing nodes, and streams of data from sensors and devices. What applications need most now is an architecture that is light, flexible, and decentralized. Event-driven architecture satisfies on all counts — an elegant example of form following function.

This article was originally published on Dzone.

Want in-depth analysis of how cognitive services are changing everything? Check out our full eBook: A World Transformed Building Smarter, Next Generation Apps with Cognitive Services. 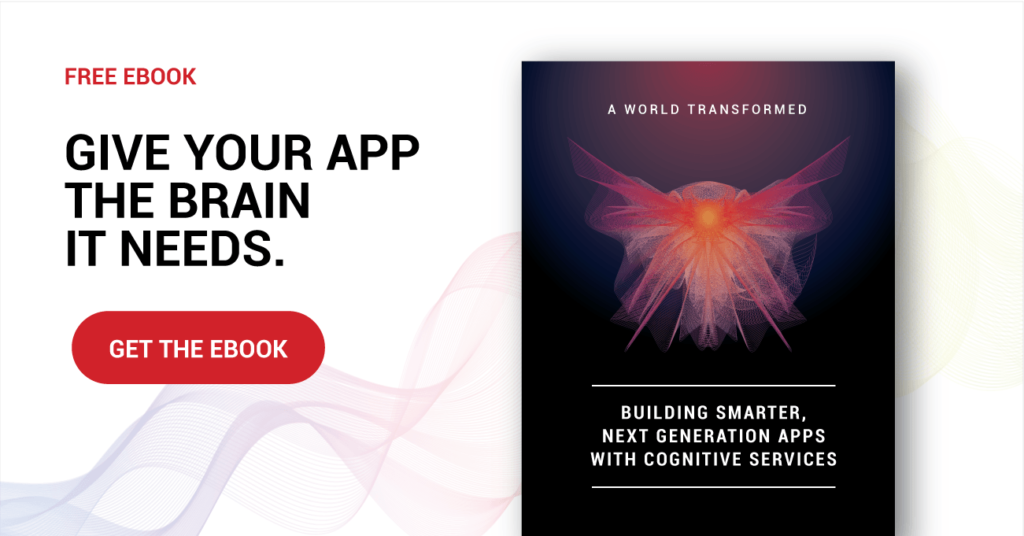