Chat in real time with the other pirate ducks on rafts distributed around the world. 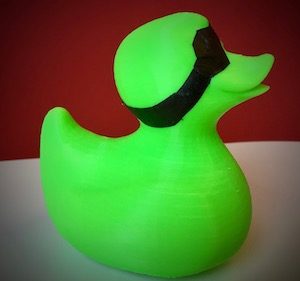 She is the Pirate Duck Admiral. She wants to chat with the other pirate ducks on rafts distributed around the world – in real time. And she wants it now.

The head Pirate Duck software engineer knows they could build a chat server with Websockets or Socket.IO, but will it scale to the massive numbers of ducks based in all corners of the globe? How many engineers will they have to dedicate to building and maintaining the backend? Pirate Ducks do not invest in large IT teams so it seems better to use PubNub, with its globally distributed endpoints and solid uptime.

The only prerequisite knowledge for this workshop is a general familiarity with JavaScript, HTML and CSS. For tools, you will need a code editor, Git to clone the starter repository, and a reasonably modern web browser.

Get the Base Code

For this workshop, the HTML, CSS and non-PubNub specific JavaScript code are already in the repository. Clone the code from the GitHub repo and checkout the workshop-basic-chat branch.

If you’ve checked out the workshop-basic-chat branch, open index.html in your browser, you will see something resembling this: 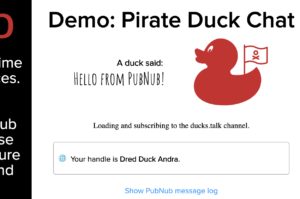 “Your handle” should be different, but the general outline should be the same.

A Quick Look at the HTML

Opening the index.html file, you will find a few things:

Signing up for PubNub and Setting API Keys

To make our chat interactive, we will need PubNub API keys. PubNub is free for up to 1 million messages a month and does not require a credit card at sign up. 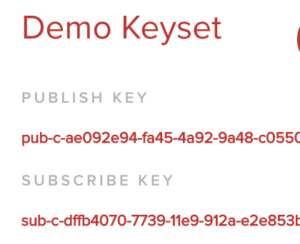 Save and close. We will come back to the other keys in this file later.

The code that updates the UI and reacts to clicks is included, but most of the PubNub specific code is not there. That’s what we’ll do below.

The first four lines of the document.ready function:

Let’s add our first PubNub functionality, the object that manages the connection to the PubNub service.

The code is also available in js/workshop-code.js.

I’ll restate this point: the way we use UUID here is not best practice. It works for the needs of this demo, but it should be unique for each client. Names should be managed separately. If you need ideas, see the chat resource center.

The PUBNUB_SUBSCRIBE_K and PUBNUB_PUBLISH_K should be the same variable names as those we filled in at the “Signing up for PubNub and setting keys” step above.

If you reload the browser, nothing will have changed. We need to add a listener.

It is possible to publish a message to the PubNub Network for other subscribers to receive without setting up listeners or subscribing. Publishing and subscribing are separate activities that are not necessarily intertwined. In fact, in a future chapter of our workshop, we will allow an IoT device to only subscribe to a channel and another device to only publish to a channel. However, for our chat demo, we want to have both. So, we do not show the publishing functions until we’ve connected to PubNub and subscribed to the right channel.

When a duck in our pirate duck network sends a message to a channel we have subscribed to, PubNub will push that to us. We need to handle that message and any network status events. We will add a listener object to manage that for us.

This code allows us to listen for status-type messages and message-type messages. There is another message type, presence that we will handle in a later chapter.

Next we need to add the actual functions that will handle the status and message events.

If you see Subscribe to channels in the code after the addListener section, don’t worry, we will come back to subscribing in a minute.

Our listener calls processStatusEvent(), so we should add that.

As the documentation mentions, we do not handle all statusEvent types, but many of the common ones. The core logic is:

Our listener also calls processReceivedMessage(), but before we add that function, let’s talk about what we need to process. A received message from PubNub is wrapped into an envelope JSON object. That envelope will look like:

Taking this line by line:

Now that we know what a message might contain, we can write code to process it.

Now that we have listeners with associated code to process received messages, we need to tell the PubNub service that we want to receive those messages. That’s called subscribing. A client can subscribe to multiple channels at one time. For now, we are just going to subscribe to the same channel that we will publishing messages to – the channel identified by the CHANNEL_NAME_TALK variable in the js/pubnub-keys.js file.

This tells PubNub we want to receive any messages posted to the channel identified by CHANNEL_NAME_TALK. When that happens, the service sends it to the SDK which routes to our installed listener.

If you reload now, you should connect to the PubNub service and the send message buttons should show. If you click on the Show PubNub message log link at the bottom you can see the messages received from PubNub.

At this point, if someone published a message using your publish and subscribe keys and on the channel defined by CHANNEL_NAME_TALK, it would replace “Hello from PubNub!”.

But, if you click on one of the buttons or tried to send a custom message, nothing will happen. We need to set up sending.

Sending a Message Over the PubNub Network

Receiving messages from others is interesting and Ducks want to participate. The buttons and custom field to send messages are there now because we’ve made a subscribe connection. They just do not do anything because we do not have a sending function.

In index.js there are two functions that send chat messages, handleCustomTextMessageSend() and handleButtonClick(). These gather the chat message and send it to a function called sendMessageToPubNub(). Let’s add that.

To send, we need a channelName, a contentKey and the content to send.

With those values, we build a message object with the channel and message content. We call in the generatedDuckName from earlier to send along with the message.

Next, we call pubnub.publish with the message object. If the publish fails, we show a basic error message for a few seconds. If it succeeds, it adds to the message log. The message logs allows you to see what messages were sent and received. Nice for a demo, probably won’t be necessary for production. 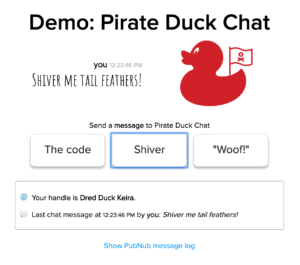 At this point, Pirate Duck IT should have an app that meets the requirements set out by the Admiral and scales to the millions of rafts around the world. With this much communication, we can all welcome our new Pirate Duck overlords.