Welcome to the Cognitive Era: The New Computing Generation

We’re moving from the programming era we’ve been in for decades to the cognitive era, combining the strengths of computers and humans to continue to push technology and what we do with it forward.

In the programming era, the time period we know best in computing, powerful computing systems became widely available, and they themselves could be reprogrammed to solve different business problems and calculations. Though they’ve completely changed the world around us, their capabilities are still constrained by their human operators. They can only carry out what we tell them to.

Cognitive computing evolved from this. It does not replace the human, but rather extends their capabilities. As we saw with the programming era, humans can think deeply and critically and use reason to solve complex problems. However, humans lack the ability to analyze and process massive data sets, whether they are structured or unstructured.

The cognitive era is just that, a merger of the immense strengths of computers with the current capabilities of their human operators. It’s a collaboration between man and machine to solve the next generation of challenges, from how we communicate, to business, to the natural world around us.

How We Got Here

We’re putting more and more reliance on computers, but we’ve hit a barrier. We’re creating massive amounts of data every minute, yet we continue to use archaic ways of processing, analyzing, and acting on that data.

We want to get more out of our data. It’s not just the contents of the data itself, but the patterns and actionable insights derived from it. The natural next iteration of computing is implementing the functionality to do just this: make sense of the massive amounts of data created, and taking action based on it.

We also want to create a more meaningful dialogue with our computers. Instead of us speaking their language, we want them to speak our language. We want them to learn and adapt over time, being able to know and understand us better. From there, they can make educated decisions influenced by prior experiences and analysis without human involvement.

And lastly we want to continue to use computing systems to work smarter and better, enabling apps, businesses, and organizations to work more efficiently, sustainably, and safer. And that’s why we’re moving from the programming era we’ve been in for decades to the cognitive era, combining the strengths of computers and humans to continue to push technology and what we do with it forward.

Structured data would be something like the information collected by a weather station. It can collect temperature, humidity, and wind speed. The system on receiving end knows exactly what types of data are being collected, and the system can easily be built in a way to utilize that data, like plotting the temperature changes over time and using that data to predict future forecasts. The data type never changes. We know how to deal with structured data.

It’s the unstructured data, information that doesn’t have a pre-defined data model, that’s the real challenge, and utilizing it has massive benefits. Cognitive computing is the answer.

As previously stated, cognitive services extend the capabilities of humans. They allow us to process, analyze, and act on massive amounts of data, light years faster than a human could manually do the same job.

By 2025, it’s estimated that there will be 163 zettabytes of data in the world, and 80% of that data will be unstructured. Documents, social feeds and messaging platforms, IoT data, video feeds, audio transmissions, and all the content that lives on the Internet from its origins are just a few sources of unstructured data. This is the data we continue to create more and more of as the world becomes more connected.

It’s not just understanding the unstructured data itself, but also connecting it to other sources of data and deriving patterns and insights from it.
Cognitive services are the key technology to better understanding this data and taking action on it.

Let’s walkthrough a couple examples of how cognitive services can take advantage of the massive amounts of unstructured data being created every minute across the globe.

In the academic world, a cognitive system could be used to analyze the vast number of related historical texts to a subject, both first and secondhand accounts (in a number of different languages), and plot out a timeline of events and rank them in terms of importance. From there, the system can act as a resource for students and researchers, and can recommend resources based on questions.

Insight engines derive value from data to track trends and surface patterns. They automate ingestion of data, then converts, normalizes, and enriches the data. A brand might use an insight engine to monitor the public’s perception of their brand, but can go deeper beyond sentiment analysis as well. They can compare their perception to the competition, match initiatives and campaigns they’ve done against public perception, compare news stories, and even predict future reception.

The 3 Pillars of Cognition for Businesses

Using the vast amounts of data and information available, systems can utilize cognitive services to find patterns, insights and connections that might never be identified by the hardest-working human beings. And having found patterns once, they can create new and unanticipated ways to adapt and grow, making discovery a more accurate and efficient proposition.

Create new engaging experiences for users, customers, and the organization itself, empowering businesses to see, hear, speak, understand, and interpret natural language and information sets. By understanding, and responding to, the ways in which users interact with apps and each other, cognitive systems are changing the way humans and systems interact with one another.

Though cognitive services impact how we process data and engage with users and systems, the most challenging but potentially revolutionary result of cognitive services is decision making. Intelligent systems give businesses the ability to have their systems weigh evidence and analyze data, then make a decision based on that data that is unsullied by human emotional input. These services can consider complex sets of information and act on them, whether to do something as simple as making a product recommendation on an e-commerce site, to way more advanced actions, such as optimizing smart devices in an industrial setting.

In our next post, we’ll walk through how cognitive services are making a massive impact on consumers and businesses. As a consumer in the cognitive era, everything changes.

Want in-depth analysis? Check out our full eBook Welcome to the Cognitive Era: The New Generation of Computing. 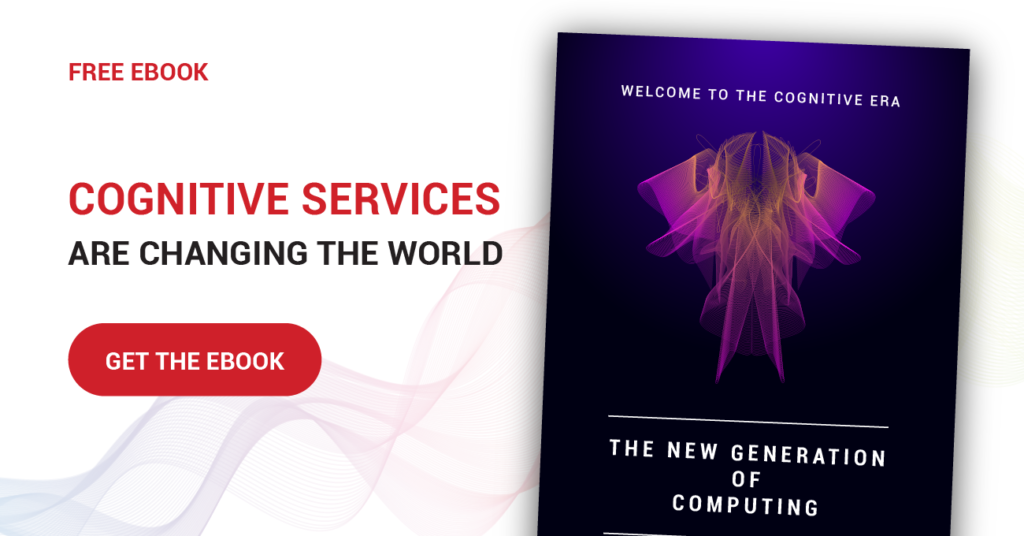