Sockets (aka socket programming) enable programs to send and receive data, bi-directionally, at any given moment. This tutorial walks through how you can send data from device-to-device, client-to-ser...

This tutorial walks through how you can send data from device-to-device, client-to-server, and vice versa using socket programming in Python.

More of a visual learner? Check out our python socket programming video tutorial below.

Ready to build? Let's jump in!

What is Socket Programming?

Sockets (aka socket programming) is a program that enables two sockets to send and receive data, bi-directionally, at any given moment.

It works by connecting two sockets (or nodes) together and allowing them to communicate in real time, and is a great option for building a myriad of apps.

Why Use Python Sockets to Connect and Send Data?

Internet-connected applications that need to operate in real time greatly benefit from the implementation of sockets in their networking code. Some examples of apps that use socket programming are:

Python, unlike JavaScript, is a language that executes synchronously. This is why asyncio was developed – to make Python more robust, particularly for the nature of socket programming.

With streaming sockets in python, data can be sent or received at any time. In case your Python program is in the middle of executing some code, other threads can handle the new socket data. Python libraries like asyncio implement multiple threads, so your Python program can work in an asynchronous fashion.

Natively, Python provides a socket class so developers can easily implement socket objects in their source code. We can start implementing sockets in our progam with three simple steps:

This code creates a socket object that we are storing in the “sock” variable. The constructor is provided a family and type parameter respectively.  The family parameter is set to the default value, which is the Address Format Internet.

Now that we know a few methods for transmitting bytes, let’s create a client and server program with Python.

How Does it Work?

This code makes a socket object, and binds it to localhost’s port 8080 as a socket server. When clients connect to this address with a socket connection, the server listens for data, and stores it in the “data” variable.

Then, the program logs the client data using “print,” and then sends a string to the client: I am SERVER.

Let’s take a look at client code that would interact with this server program.

How Does it Work?

This client opens up a socket connection with the server, but only if the server program is currently running. To test this out yourself, you will need to use 2 terminal windows at the same time.

Next, the client sends some data to the server: I am CLIENT

Then the client receives some data it anticipates from the server.

Done! You can now get started streaming data between clients and servers using some basic Python network programming.

How Do You Send Data Between Clients?

Sending data between 2 or more client devices over the internet is tricky. Due to protections implemented by network security, not all devices connected to the world wide web have a publicly accessible internet protocol (IP) address.

This means that the Python code that we implemented will not be 100% reliable for sending peer-to-peer data in our real-time app.

So, how do we achieve reliability and speed when transmitting peer-to-peer data?

This can be accomplished using a server in the middle: 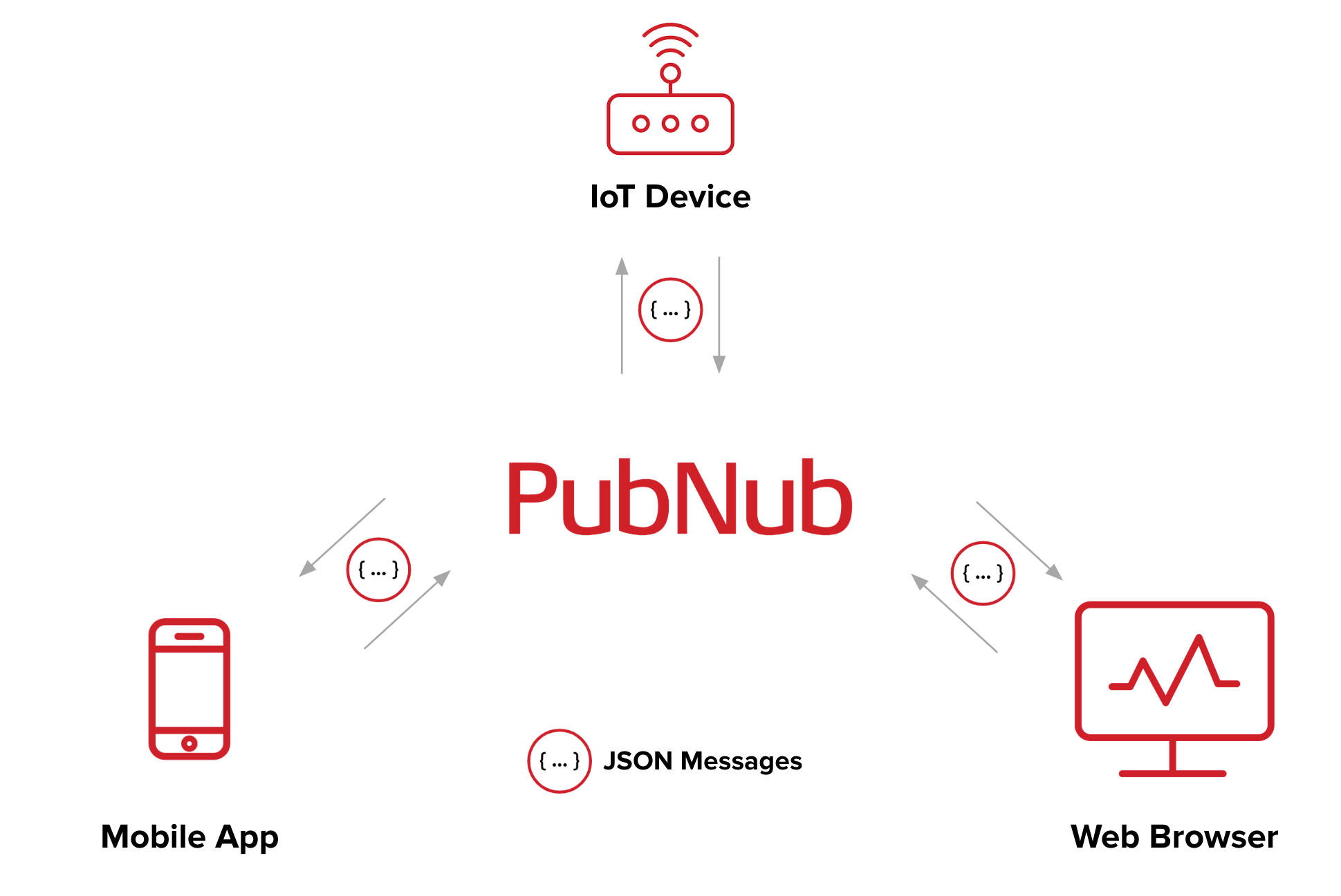 PubNub does this best with the Pub/Sub API. It is fast, reliable, secure, and easy to implement on any client device.

Whether you have a Python server, a JavaScript website, or anything in between, you can use PubNub to send data to anyone in under 250ms.

With One-to-Many, One-to-One, or Many-to-Many, PubNub scales automatically to support any application load. Using the API opens up an instant, always-on connection between all clients that have the Pub/Sub API keys. This accomplishes the same objectives as a socket connection.

PubNub and Python Sockets with an SSL Connection

Here is a python socket example of peer-to-peer data that is sent with PubNub, on a single channel, with SSL. You can think of this like sending data over a TCP server socket in python.

Strings can be entered on the command line for these 2 client programs. Maximum message size for PubNub publishing is 32kb. Use 2 terminal windows to try out the code!

Wrapping Up Socket Programming in Python

All of the code in this post is hosted on GitHub in the Python Socket Demo repository, if you'd like to have it all in one place.

We hope you enjoy using our guide to socket programming. Hopefully you can use it to build something amazing. It could be an amazing smart home security system, or a real-time chat app! The possibilities are endless. Let us know what you create!

PubNub is entirely free up to 1 million messages per month. For more capabilities of the API, check out the PubNub Python v4 SDK documentation, or any of the other 75+ PubNub client SDKs.