How to build a more efficient real-time application to decrease history API calls by using an inbound channel pattern for pub/sub messaging.

PubNub stores all messages per channel with the Storage & Playback feature add-on. We have a history call for retrieving messages that may have been missed due to being disconnected.

Using this is a common pattern, but what if you have hundreds of channels? It becomes far less efficient to call history on every single one. How do you change how you use channels so that you can reduce the number of history calls?

It’s quite natural to think of making a new channel for each pair of users to have a 1-1 chat. If I have 4 different people I have private chats with, that means I have 4 channels I publish and subscribe to. This also means when I start the app after being disconnected for a few hours, I have 4 calls to history() to get any missed messages.

After a few months, I have accumulated more friends on the app, and now I have 40 friends each with 1-1 chats. Now when I fire up my app, I have to make 40 history calls to see what messages were missed. This is starting to accumulate and become inefficient. 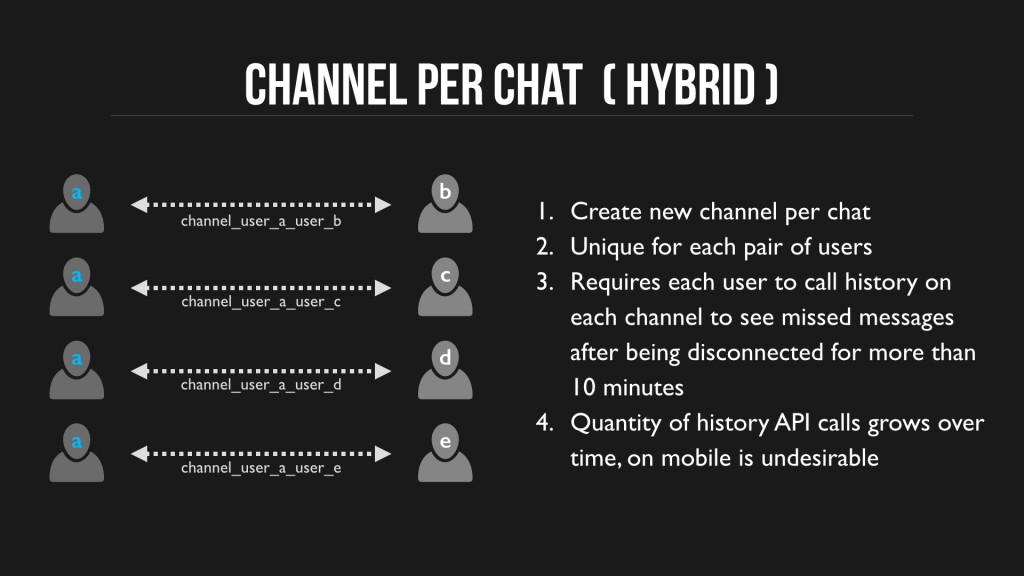 How can I change this so I don’t need to make so many history API calls? Rethinking this – I want to reduce the history calls to be as few as possible. What I am trying to get by making the history calls is any messages that were sent to me in that time, because I always already have the messages that I send. What distinguishes one 1-1 chat from another is just who it’s with. As far as the data itself, there is no difference in structure from one chat-channel to another.

With this in mind, let’s restructure how chat messages are delivered. 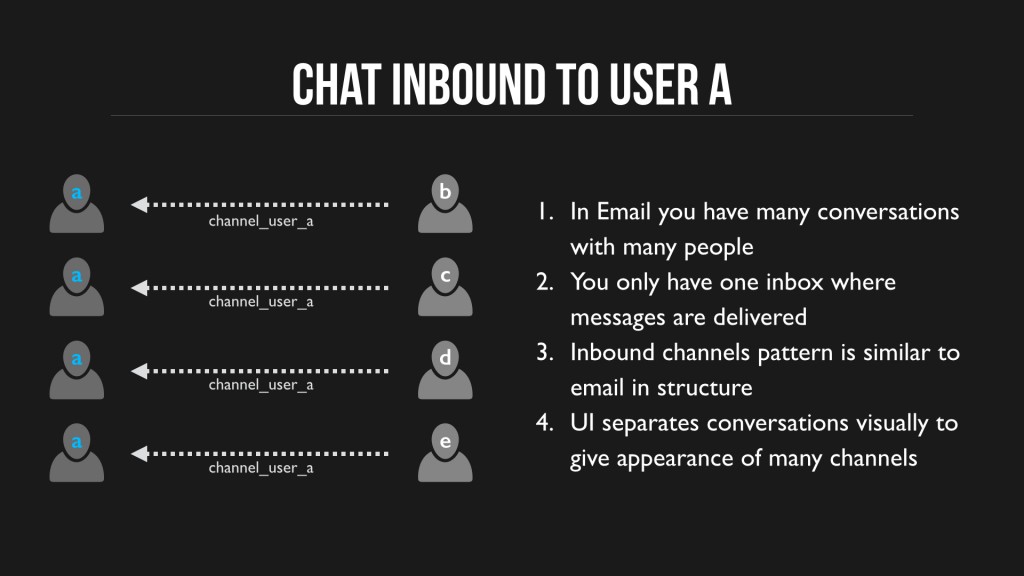 This means that to get all messages missed for User A, that user only needs to call history on the inbound channel. This is very much like having an email address and an inbox. I have many conversations, but they all come into one place. My UI is what separates them logically, and it uses the metadata (the to/from/subject) to organize it in a way that I understand it, as separate conversations. 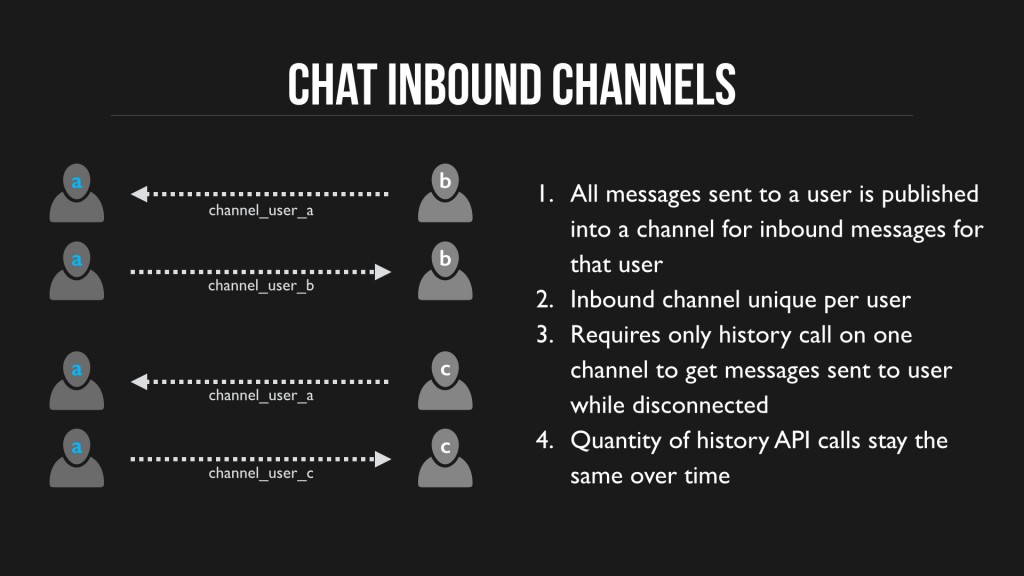 As you can see, Users B,C,D and E are all sending messages intended for separate 1-1 chats to User A’s inbound channel. Just like 4 people sending me an email to my email address. Visually they will be separated in the UI, but as far as data is moved and organized, it’s all coming in over a single channel, user a’s inbound channel.

In the case of group chat, when User A publishes a message to the group, that user can issue multiple publishes, one for each user in the group – into their inbound channel. If the group is quite large, let’s say more than 10 people in the group chat, I may want to separate that particular chat into a separate channel like the original scenario. In that case, I still have reduced my history calls significantly.

In the original scenario, since each chat is a separate channel, I might have messages that look more like this:

In this Inbound Channel scenario, I might structure it a bit differently and add more metadata for the UI.

From User A to User B, send to channel_user_b

Of course, you can add a lot more information, information the UI would use to organize it visually, or to sort, or search, tag, etc. You have no limitations in what you can send. I’ve thrown in a “chat_id” key that helps my UI identify the chat it belongs to.

Lastly, I’ll throw in a quick example of how it looks when do this Inbound method for a group chat.

One little gem that you can do in addition to the above pattern is to enable an interesting usage of PubNub. You can combine the two patterns. This allows for the ability to page back through history in a focused way and easier. First, you still use the Inbound channel, but you also use the Hybrid unique channel between each pair of users. 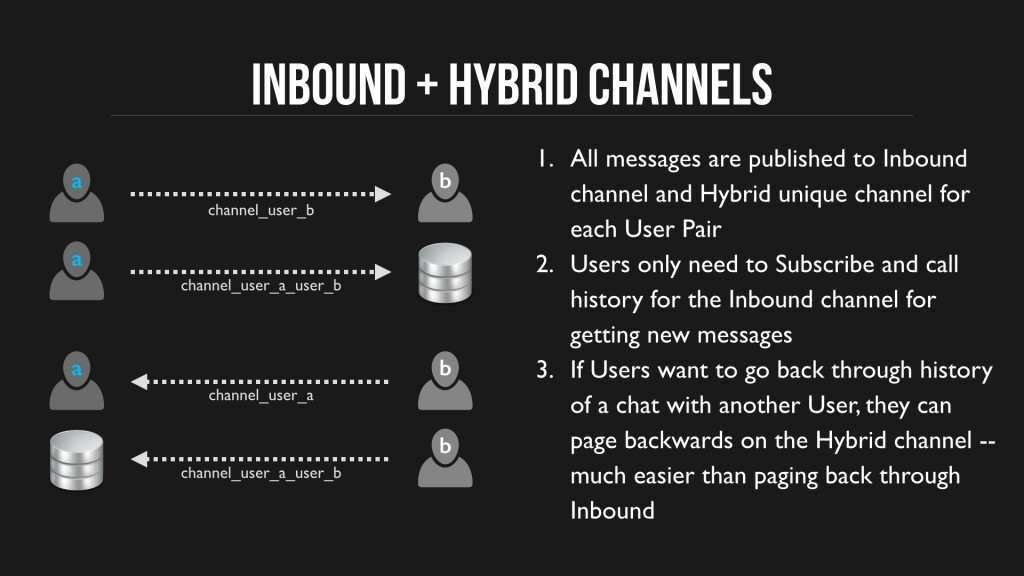