Getting Started with the PubNub Angular 2 SDK (Part One)

How to get started with the new PubNub Angular 2 SDK, including publish/subscribe messaging and message history.

Angular 2 is the new version of Google’s popular MV* framework for building apps in the browser and beyond. In this blog series, we’ll cover how to build real-time functionality into web and mobile apps with the Angular 2 SDK for PubNub.

In this part, we’ll use our core Publish/Subscribe feature to build a basic real-time chat app, in this case, sending and receiving data, and saving that message history with Storage & Playback. In our next part, we walkthrough more advanced features of the PubNub API such as Presence (online/offline detection) and Custom State.

All in all, we feel like Angular 2 presents a bunch of improvements over AngularJS. Not that it’ll feel awesome while re-learning or migrating all the old apps, but we do feel like the investment in learning Angular 2 (and TypeScript) will improve things over time.

Okay, so we know we want to build an application with Angular 2, how do we get there? The first non-Angular 2 dependency we’ll need is the PubNub JavaScript SDK.

PubNub and JavaScript work really well together because the PubNub JavaScript SDK has been battle-tested over the years across a huge number of mobile and backend installations. The SDK is currently on its 4th major release, which features a number of improvements such as isomorphic JavaScript, new network components, unified message/presence/status notifiers, and much more. Since we’re using the PubNub Angular 2 SDK, our UI code must use the PubNub JavaScript v4 API syntax.

So, what exactly are those new features all about? Here’s the quick run-down so you know what you’re getting:

In addition, there are a few migration tips you should keep in mind for V3 versus V4:

By now, you might be wondering about how all this JavaScript is distributed. The PubNub JavaScript SDK is distributed via Bower or the PubNub CDN (for Web) and NPM (for Node), so it’s easy to integrate with your application using the native mechanism for your platform. In our case, it’s as easy as including the CDN link from a script tag.

So first off, you’ll want to remember that the Angular 2 SDK will be using the PubNub JavaScript V4 API (just in case you find yourself copy and pasting any V3 configuration or code into your app – beware)!

The new Angular 2 API is based here in GitHub, and is also available via NPM as pubnub-angular2. If the success of PubNub and AngularJS is any indication, the Angular 2 documentation and tutorials should be growing quickly in the months ahead!

For folks who are familiar with the AngularJS SDK, here’s an overview of what’s new in the Angular 2 SDK:

Overall, the new Angular 2 SDK feels pretty natural in building up a new real-time web application. If you have any ideas for suggestions, please drop us a line!

You’ll first need your PubNub publish/subscribe keys. If you haven’t already, sign up for PubNub. Once you’ve done so, go to the PubNub Admin Portal to get your unique keys.

The publish and subscribe keys look like UUIDs and start with “pub-c-” and “sub-c-” prefixes respectively. Keep those handy – you’ll need to plug them in when initializing the PubNub object in your HTML5 app below.

Note: for this article, you’ll want to make sure to enable the Storage and Playback feature in your PubNub Application configuration to take advantage of the history() feature.

Diving into the Code – the User Interface

You’ll want to grab these 94 lines of HTML & JavaScript and save them to a file called pubnub_angular2_basic.html.

The first thing you should do after saving the code is to replace two values in the JavaScript:

If you don’t, the UI will not be able to communicate with anything and probably clutter your console log with entirely too many errors. For your convenience, this code is also available as a Gist on GitHub, and a Codepen as well. Enjoy!

For folks who have done front-end implementation with Angular 2 before, these should be the usual suspects:

In addition, we bring in the CSS features: 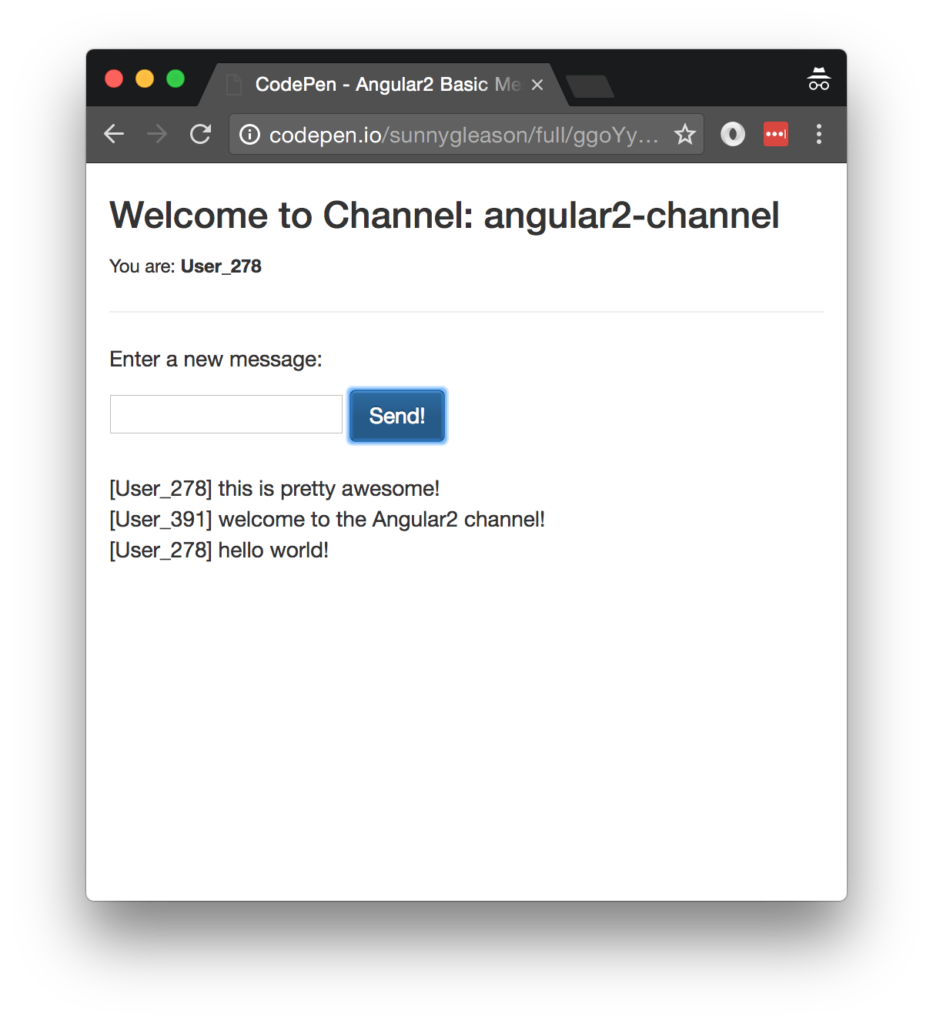 The UI is pretty straightforward – everything is inside a main-component tag that is managed by a single component that we’ll set up in the Angular 2 code.

Let’s skip forward and show that Angular 2 component template. The h3 heading should be pretty self-explanatory, along with the tag that displays the userId. We provide a simple text input for a chat message, as well as a button to perform the publish() action to send the message out on the PubNub channel.

The component UI consists of a simple list of messages; We iterate over the messages in the component scope using a trusty ngFor. Each message includes the chat text (in your application, you may choose to use a structured JSON message instead).

And that’s it – a functioning real-time UI in just a handful of code (thanks, Angular 2)!

Right on! Now we’re ready to dive into the Angular 2 code. It’s not a ton of JavaScript, so this should hopefully be pretty straightforward.

The first lines we encounter set up our application (with a necessary dependency on the PubNub AngularJS service) and a single component (which we dub main-component).

The component has a constructor that takes care of initializing the PubNub service and configuring the channel name, (random) user ID and message-related variables.

Early on, we initialize the pubnubService with our credentials.

We subscribe to the relevant channel and configure an event handler that will unshift() any incoming messages into the self.messages array.

To implement the history function, we call history() which returns a Promise. To handle the Promise, we call the then() function with a callback that reads the messages collection from the incoming history event into the self.messages collection.

Note that we use x.entry because that’s the new attribute for message data in the PubNub history API.

We also create a publish() event handler that performs the action of publishing the new message to the PubNub channel.

Now that we have our new component, we can create a main module for the Angular 2 app that uses it. This is pretty standard boilerplate that configures dependencies on the Browser and Forms modules and the PubNubAngular service.

Not too shabby for about 94 lines of HTML & JavaScript!

Thank you so much for joining us in the first part of our Angular 2 series! Hopefully it’s been a useful experience learning about what’s new in the JavaScript and Angular 2 worlds. In future articles, we’ll dive deeper into additional PubNub APIs like Presence and User State.