Bringing the Marauder’s Map to Life at TechCrunch Disrupt

The Wizarding World of Harry Potter was the name of the game for this year's TechCrunch Disrupt Hackathon in London. Well…at least for us! We partnered with our good friends over at Mapbox ...

The Wizarding World of Harry Potter was the name of the game for this year’s TechCrunch Disrupt Hackathon in London. Well…at least for us! We partnered with our good friends over at Mapbox and IBM Watson to host a Build a Harry Potter’s Marauder’s Map-inspired App using PubNub BLOCKS contest.

The Marauder’s Map is a magical map that detects and shows real-time location of people. It only unlocks for the person with the correct password, and talks back to people who submit an incorrect password. The map also shows secret passageways and how to get through them, as well as the ability to identify people, countering any disguises that user may have. The map gives verbal feedback based on certain actions from the user.

In the span of 20 hours, multiple teams delivered amazing apps that captured both the spirit of the Marauder’s Map, as well as the innovative technologies to power it.

Here’s a list of our favorite entries, including the winners of the contest:

Marauder’s Battle by Crispy Bacon allows users to find one another on a live-updating map, then initiate a battle. Spells are cast by making gestures using their smartphone, and initiated by saying the spell name into the microphone. And we were proud to award Marauder’s Battle as the winner of the contest! 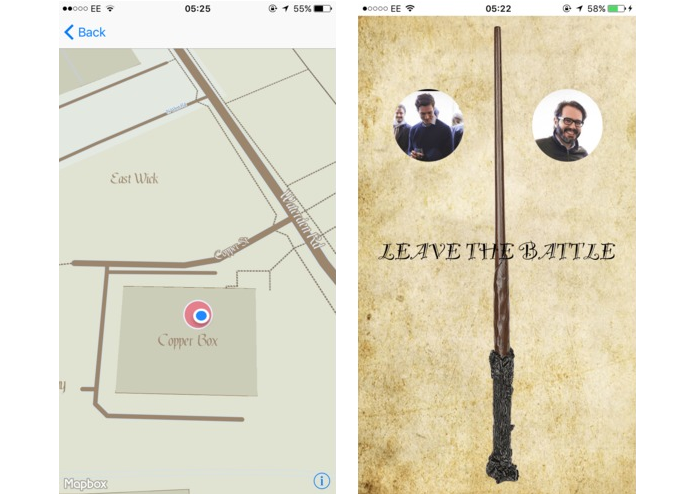 Marauders.tech is like Pokemon Go set in the Harry Potter universe. The game is an RPG that physically allows you to walk around the map hunting for ingredients to potions and spell recipes. Users can also collect items using photo recognition (using the IBM Watson Visual Recognition API) to make new recipes and cast spells using voice commands. 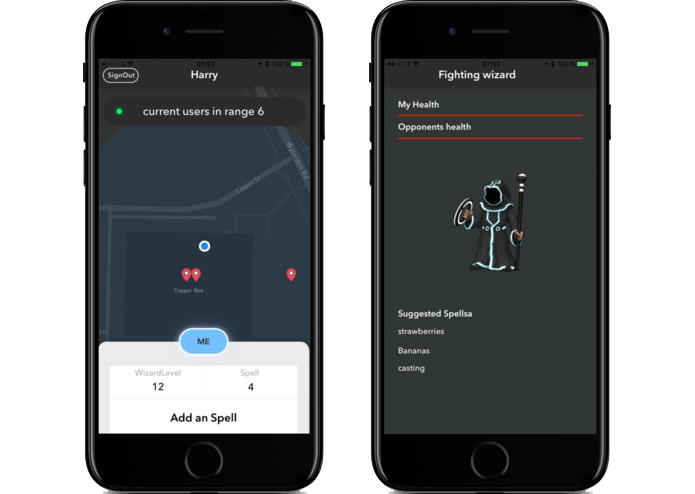 Marauder’s Map is less game, and more communication: the app is built on the premise not only of seeing where your friends might be at that very moment, but being able to leave messages for them when they get to another specific place. The app lets you leave messages tagged to a location that are only visible to your friends in the area, and also secures the app through reciting the secret spell using IBM Watson Speech-To-Text block.

Marauder Tours tracks visitors with the app within the venue so help manage guided tours and improve security during school trips. The app also offers a ‘treasure hunt’ style list of things to find to help user engagement at the venue. While the app was less inspired by the Harry Potter subject of the contest, it still embraced the theme of the Marauder’s Map, allowing users to turn off and on tracking, and see other users moving smoothly. 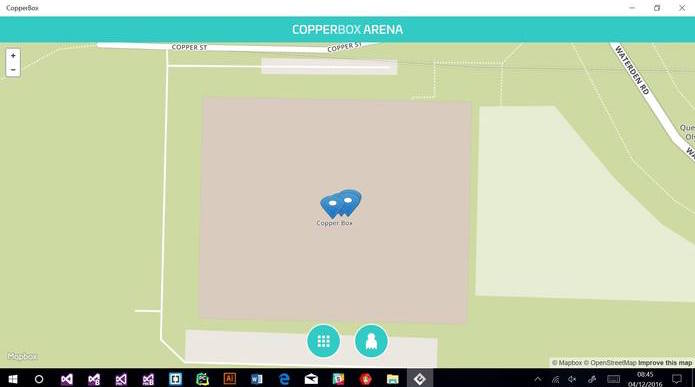 Marauder’s Magic is a mobile interactive game exploring an augmented reality, allowing users hunting for secret passages and spells. With Mapbox, the app allows the user to view the world through a custom map design, and interact with events that occur along the way as they move around a space.

There was so much more…

These apps were just a couple of our Harry Potter inspired submissions, but there was so much more outside of the Wizarding World! Stay tuned for future writeups, as we dive into other great submissions, and host more contests across the world to see what you build with the likes of PubNub, Mapbox, IBM Watson, and more!