The buzzword being Internet of Things, we wanted to build something simple, yet powerful, that could extend beyond the hackerspace and be applied to the real world. It had to combine software and hardware, and allow people at home to build it and try it themselves.

Arduino came to mind, but we’ve already written a good bulk of real-time tutorials using the Arduino board, so we wanted to try something different. Then we thought of our good friends over at Atmel, and decided to combine the Atmel MCU and PubNub. Our project? A real-time temperature sensor.

We’ll use our new JavaScript framework EON to stream and visualize the data on our live-updating UI. 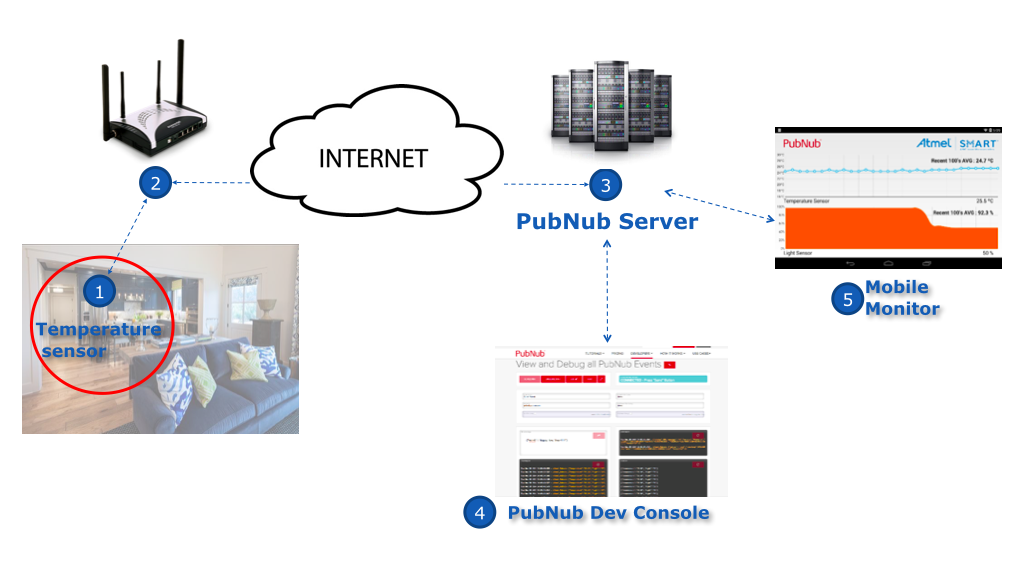 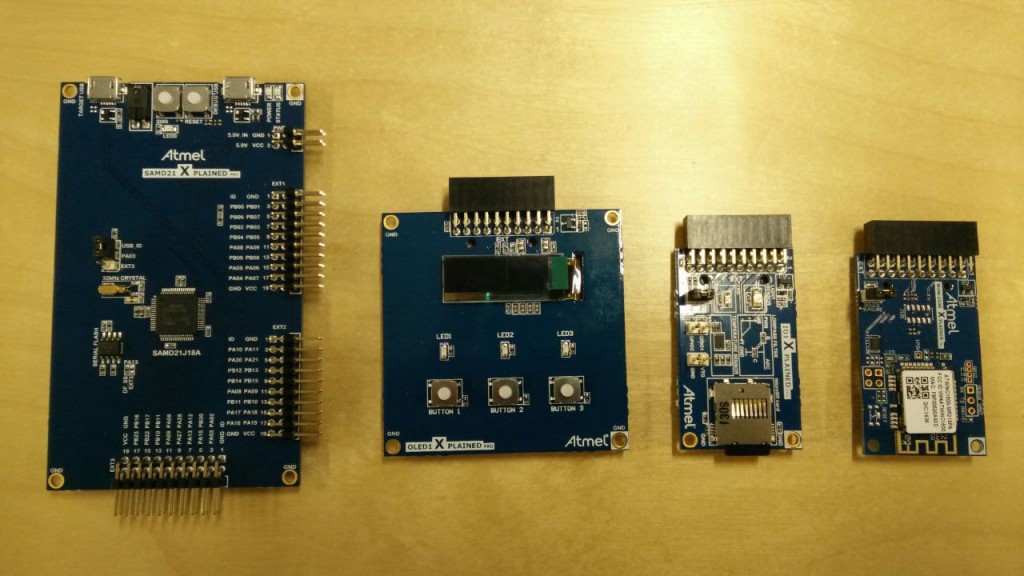 A prerequisite is that you upgrade the firmware for SAMD21 using the .bat file provided with the PubNub Atmel example before you run this demo. Make sure no other software like putty or teraterm is using the com port). Close Atmel Studio and the putty terminal. The firmware upgrade is successful if you see a PASS sign on the terminal after running the code.

2. Connecting the hardware, the right way: 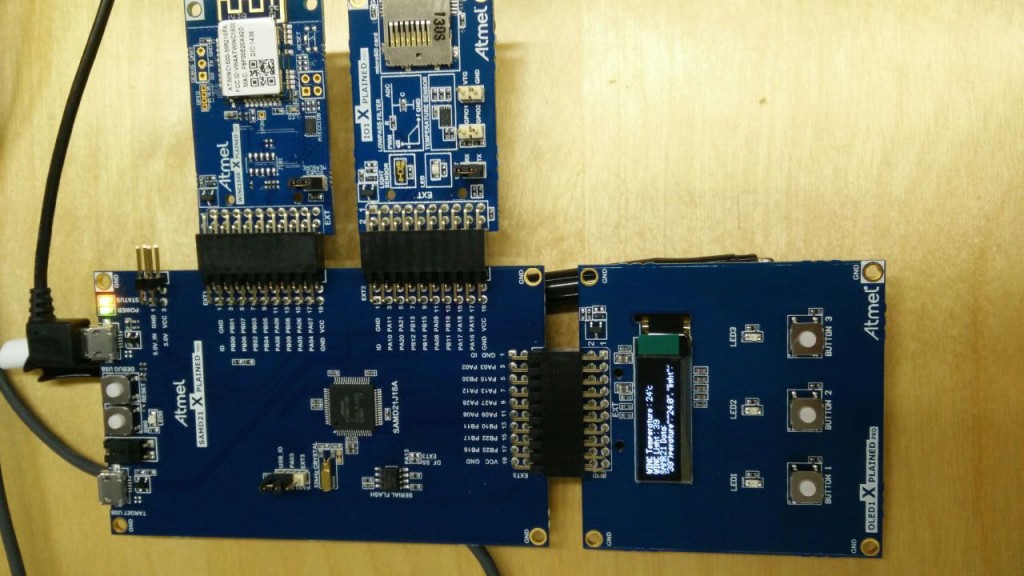 3.1 Open the PubNub example: pubnubAtmel/PubNub_EXAMPLE.atsln (included in the code download) in Atmel Studio and you will see the following page. Make sure you choose the debugger/programmer and interface as shown: 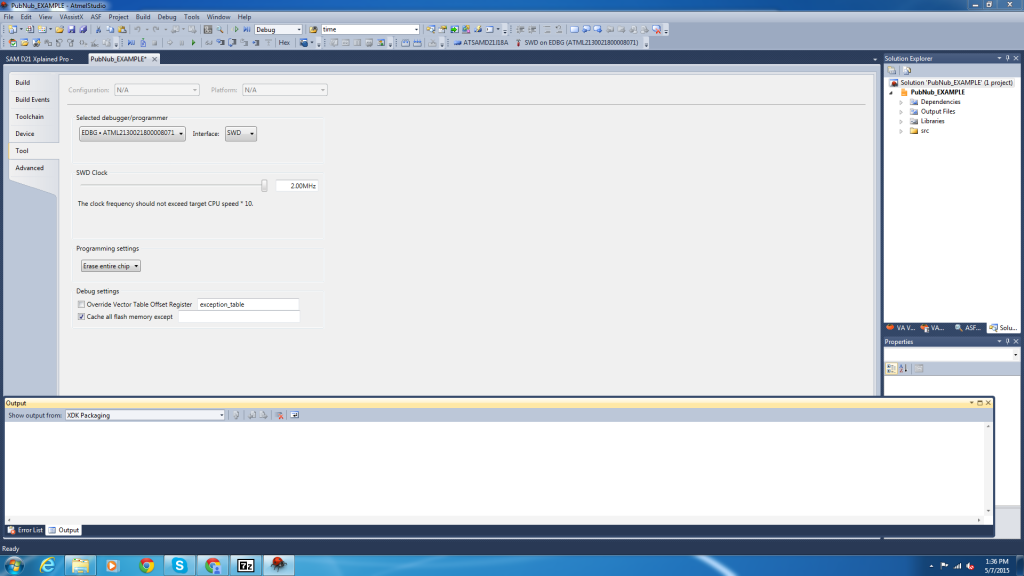 3.2 Include the following lines in pubnubAtmel/src/main.h:

3.3 In pubnubAtmel/src/main.c, add the channel name and pub, sub keys. 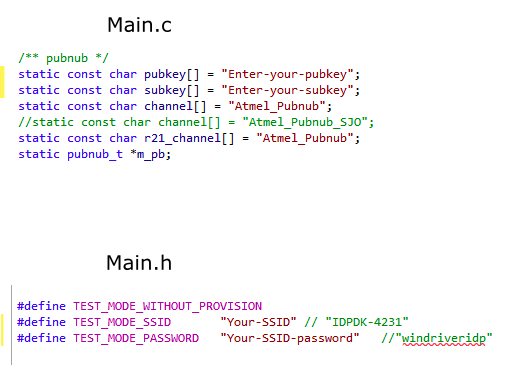 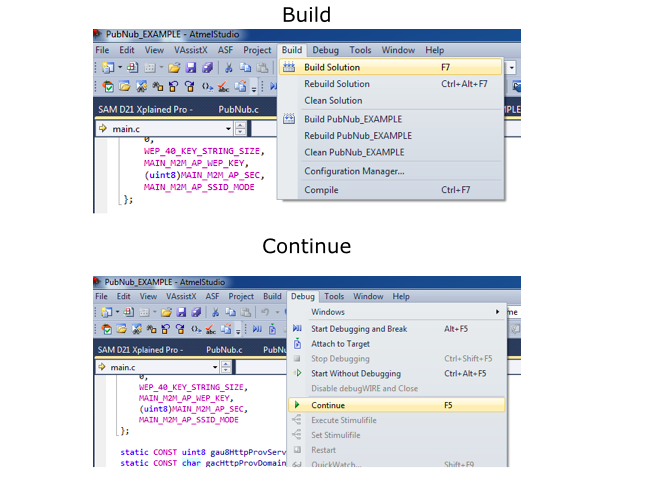 3.5 Open PubNub Developer Console, use the same channel name and pub,sub keys as in the code and SUBSCRIBE.

That’s all! We’re now able to collect and stream temperature data in real time. But what’s next? Well, we need to do something with that data, right? Let’s visualize it!

A sped up example of our visualization. Notice the alert when the temperature exceeds 60ºF.

We didn’t just want to display raw data off the sensor as a live-updating number. That’s boring. So my partner-in-crime Tomomi built our beautiful temperature visualization, which you can see above! It mocks nursery or greenhouse monitor (a typical, realworld use case for real-time temperature sensors).

The interface is runs in the browser using the EON JavaScript framework, and the technology behind is quite simple, using PubNub JavaScript APIs to subscribe the data sent from the Atmel chip. Because our interface is simple, lightweight, and built entirely in JavaScript, it’s accessible from anywhere in the world with any kind of device – mobile phones, tablets, and any smart device, as long as you have a web browser. The main purpose behind this is to present information in most efficient manner without losing its accuracy.

In this scenario, the UI shows the current temperature, also a simple line graph, updating in real time so that you can tell the relative changes of the temperature, raising and dropping. This particular data is simple, but when you have multiple, more complicated data, data visualization plays more crucial role.

This demo is read-only and reads the ambient temperature, but in reality, you want to develop products that lets your users monitor and control, i.e, bidirectional communication between devices. For instance, if you have a smart A/C, not only monitoring the current room temperature, but you need to make it controllable from a remote devices.

With the power of PubNub APIs, you can achieve this with no hassle. I hope I am leaving you guys with enough excitement to try this demo out, and also build cooler ones. Tweet me at @bhavana1110!