At IoT StreamConf 2015, leaders converged to define the IoT tech stack. Here are three hot topics coming out of the conference.

At last month’s IoT StreamConf, the best and brightest minds in IoT converged at the Bentley Reserve in the heart of San Francisco for a full day of talks, expert panels, developer workshops, demos and networking. Experts in Internet of Things security, networks, communication, hardware, software, platforms, big data, and more joined together with a clear goal:

To define the Internet of Things tech stack.

And that’s exactly what they did. While other conferences merely state the problems and challenges, then leave off with no solution, IoT StreamConf did the opposite.

PubNub Founder and CEO Todd Greene kicked off the day with an optimistic keynote address, looking forward to solving the challenges. And the wide variety of subsequent speakers and panels did the same. Prior to the conference, the excitement was already brewing.

There were three clear hot topics spread throughout the day. Without further ado, here they are:

One of the hottest topics of the day was IoT security, ie. how we’re going to secure the billions and billions of connected devices as the Internet of Everything continues to skyrocket.

In a popular panel with leaders from MuleSoft, Exosite, Sonatype, and Hoyos Labs, as well as a talk from Rohini Pandhi, Sr. Product Manager at PubNub, the challenges of securing the Internet of Things were laid out, and solutions to those challenges were presented.

You can check out Rohini’s full talk, with slides, below. And under that, check out our expert IoT security panel:

We have thousands of choices for hardware, operating systems, and chipsets that continue to push the Internet of Things forward. The conference had some great panels aimed not just at hardcore hardware developers, but also those who aren’t embedded system developers, especially those who have grown up in a software world.

Hardware is becoming more accessible, inexpensive, and easier to use. Twilio’s Ricky Robinett’s “Hardware Hacking for Software People” showed just how easy it is for a software developer to get started with hardware, showcasing a Twilio – Tessel integration. 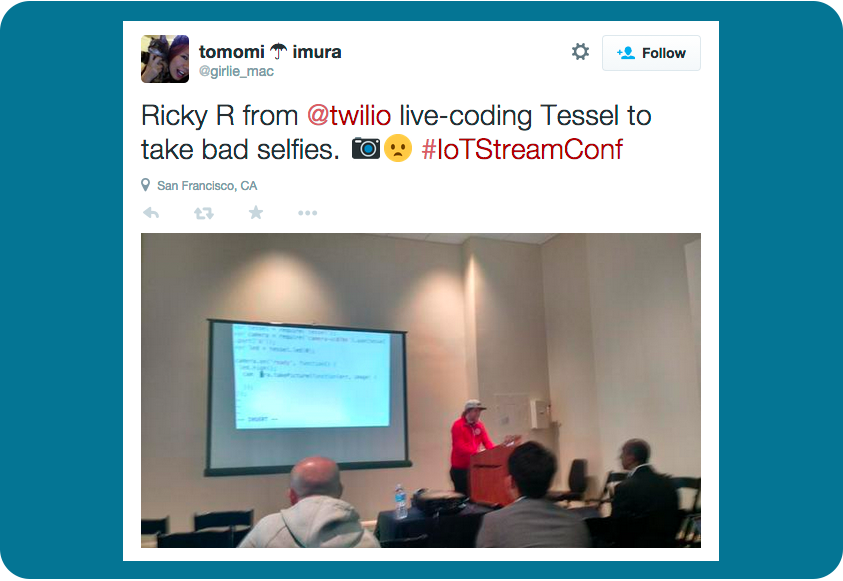 And in the spirit of DIY and solutions rather than theory, we hosted two great Raspberry Pi workshops at PubNub HQ. In the workshop, we when from zero to Raspberry Pi, and by the end of the day, workshop attendees had built a fully-functioning real-time sensor app with the new Raspberry Pi2 Model B. 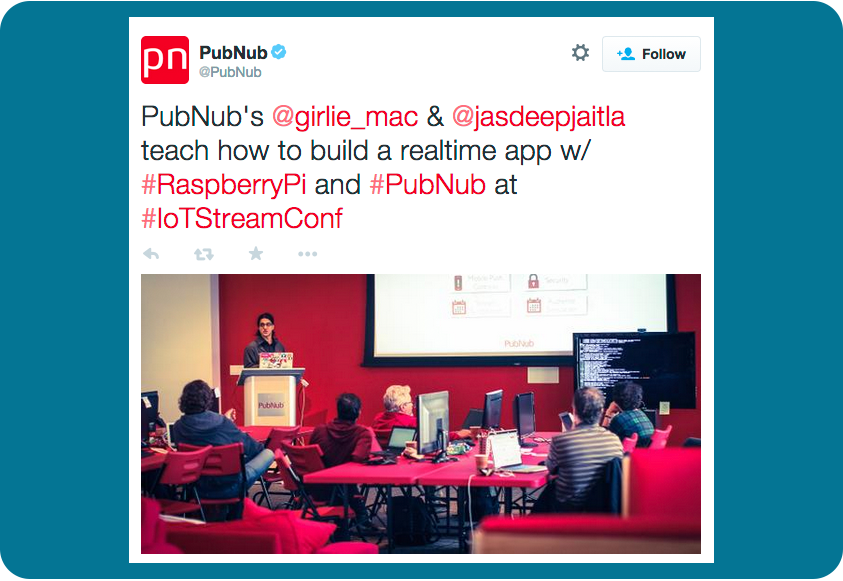 One of the key themes of the conference itself was the notion of not reinventing the IoT wheel for every project. As a community of IoT developers, programmers, and business leaders, we need to work together to continue to drive the IoT forward. Some vital components to building the IoT community revolves aorund open source, partnerships, and business relationships.

SoftLayer’s Joshua Krammes’s talk “Building Community Around you IoT Brand” discussed community building and how to put your brand on the path from brand awareness to revenue. One of the highlights of his talk was five critical skills you need to become a top-tier community leader. Another great point was summed up perfectly by this quote:

We expected high quality conversations, but our expectations were blown away. As all the areas of the IoT technology stack continue to make leaps and bounds and evolve, the conversation around defining the IoT stack will continue to grow.

And because of that, we can’t wait for next years IoT StreamConf!