**NOTE: Since we wrote this tutorial, we’ve released a new, completely-redesigned version of our iOS SDK (4.0). We rebuilt the entire codebase and took advantage of new features from Apple, simplifyin...

Not long ago we partnered with a high-standards online engineering broker (an online listing service where you can post engineering projects). The partnership involved joint PR and blogging, however a new opportunity/idea was presented. This particular idea stemmed from a commission listed on the broker’s website which listed requirements for building an integrated Real-time Map Service. We took the opportunity and built a Ruby GEM with a sprinkle of documentation and HTML5. 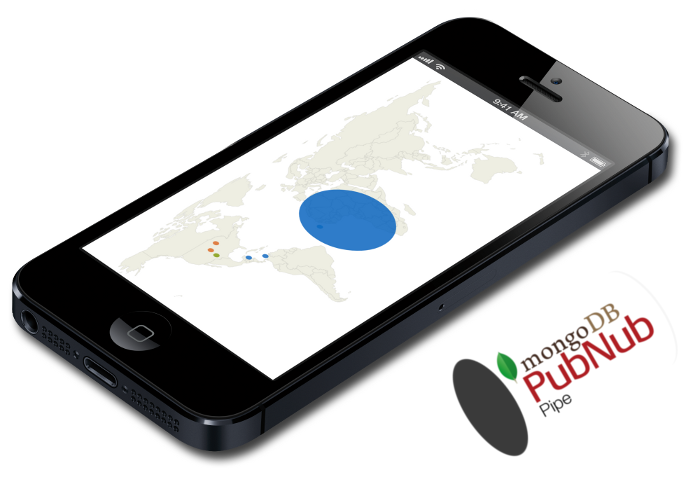 For those of you who need a quick mini-guide to getting your MongoDB installed and running with data sync streaming directly to your mobile app, you can follow this guide: MongoDB Pipe GitHub Repository. It will show you how to download/install MongoDB and the MongoPipe GEM.

Lat/Long from MongoDB replicated to your iPhone App

The commission at the online workplace was posted as a $3,025 bounty. Rather than taking the commission for ourselves, which involves building and delivering the solution in a private exchange, we instead reviewed the specifications and requirements and we developed an open source implementation that you can download and run for your live app today! MIT License, so you can use this however you desire. We even created a GEM for you and made it easy to get started:

Downloading the GEM is the first step in the process and next we’ll walk you through more details. Actually now may be the time for you to watch the short video, so feel free to jump into that now if you want a very brief demonstration and usage covering these points:

The video will show usage of the MongoPubNubPipe gem. Source code is available via GitHub if you want to see everything –MongoDB Pipe GitHub Repository

This becomes the new interface that is available with mongopipe gem:

Usage of MongoPubNubPipe is available lower in this document.

The video demonstrates an implementation of the connection between MongoDB and a mobile device (an iPhone in this case). This application code and gem library will provide you a way to easily add a live always-on map connection which allows you to send lat/long signals directly to the device displaying the map with the specific Lat/Long DB written into MongoDB. This will cause the device to draw an animated dot onto the screen of the device in real time.

The dot that animates is triggered by simply writing to your MongoDB collection directly either through the mongo console or through your RoR/Ruby Server Code. For example here is a MongoDB Console Command that will cause a DB write, creating a Document, which then triggers the sync with the consumer iPhone device that is rendering the map in real time.

Once you’ve written a Lat/Long coordinate into MongoDB collection, the process begins instantly synchronizing with any connected iPhone. We where able to include several feature requests and here follows the requirements:

Simple enough, yes, though it requires moving pieces. We simplified the process and built two modules: one in Ruby and one in HTML5. We’ll walk through the methods for getting you started and how to hook into the stream on your iPhone App. You can fast-track the tutorial and go strait to the GitHub Repository or gem install mongopipe package for ruby.

The ruby GEM mongopipe utilizes the tailable cursor interface provided by MongoDB Core. Document Data is then piped directly through the PubNub Network which uses a direct broadcast synchronization socket with the mobile app.

Next we’ll show you what the process is to get the mongopipe running on your Ruby Server.

Make sure MongoDB is running

Next open a text editor and copy/paste the following mongopipe example.

Save this to a file pipe.rb for example then execute it.

This will connect directly to MongoDB and print usage guide on next steps. The video covers only a demonstration of this process. Here is a sample output of what may be provided via the puts(doc) output:

This blog entry was intended to give you a quick skim over the details on how the mongopipe ruby gem works and what is involved in coordinating the embeddable mobile HTML5 animated map.

If you have any more questions please tweet @PubNub directly.

You may be curious about the connectivity mechanism between your iPhone App and your MongoDB Sever. Checkout the PubNub WebSocket Reference below to see the transport mechanism utilized.

Thank you for reading!

Following is an example of how the Map app implements the socket: