How to create your own smart parking system with real-time monitoring using PubNub, Soracom, and Raspberry Pi.

Never before have we lived in an era, where every “thing” could seamlessly be interconnected by the Internet. The idea of Internet of Things (IoT) has continually transformed our world by presenting innovative solutions to numerous problems using an Event Driven Pub/Sub Architecture. For example, to solve the exhausting problem of finding parking in crowded spaces, parking garages have installed live electronic dashboards showing which spots are available by subscribing to status updates published from individual sensors in a parking lot. Building such an IoT app can be challenging due to a number of hurdles.

In this tutorial, we will build a Smart Parking Simulation using Raspberry Pi and an ultrasonic sensor to detect whether a parking spot is occupied or vacant. We will use Soracom Air to send messages from the sensor to PubNub via cellular data. Then using PubNub’s Publish-Subscribe API, we will make live parking data instantly available to all the app’s mobile users. This is shown in the following diagram. 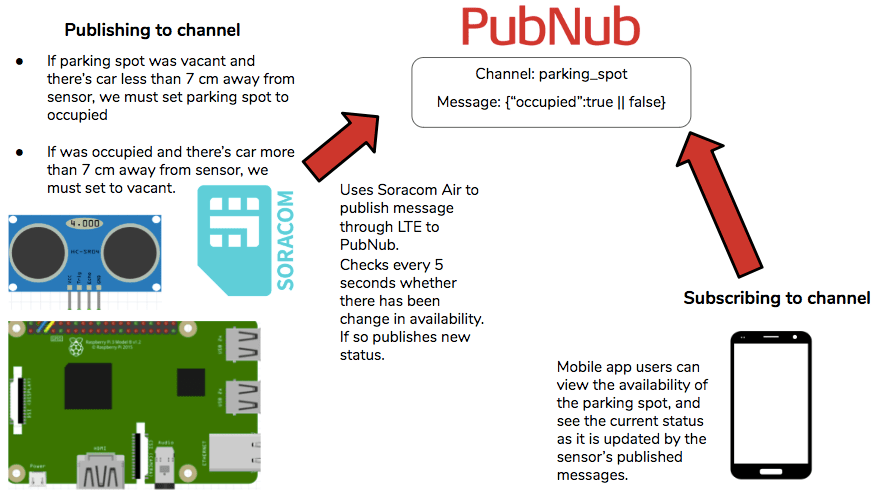 To build this demo, you will need:

If you haven’t already, make sure to install the Raspbian OS onto your Raspberry Pi. To do this, we will first install it locally on our computer. This will be of disk image format, so we will need to flash the disk before using it. You can use Etcher to flash the disk onto your microSD card Adapter.

Once the Raspbian OS files are on our microSD card Adapter, we may remove the microSD card from the adapter and then insert it into the bottom slot of our Raspberry Pi. With the OS installed, you may now boot up the Raspberry Pi by plugging in a keyboard, mouse, monitor, and power source.

Congrats, we have now completed the configuration of our ultrasonic sensor. If you find yourself stuck with the configuration of the sensor, check out this tutorial for a more detailed explanation. While you are building your circuit, remember that on the breadboard’s blank rails current flows horizontally and on the breadboard’s positive and negative rails, current flows vertically. Next, we will set up PubNub and Soracom into our IoT app.

First, we will create our app in the PubNub Admin Console (It’s free). After creating the app in the console, you will see the publish and subscribe keys which we will use in the next step to connect PubNub and Soracom.

We will head on over to the Soracom Admin Console. Here we will click Register SIM and input the ICCID and PUK digits, which you can find on the back of your Soracom Air Sim Card. 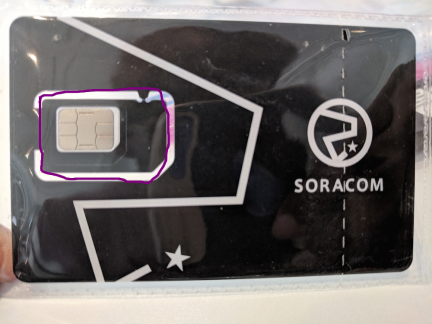 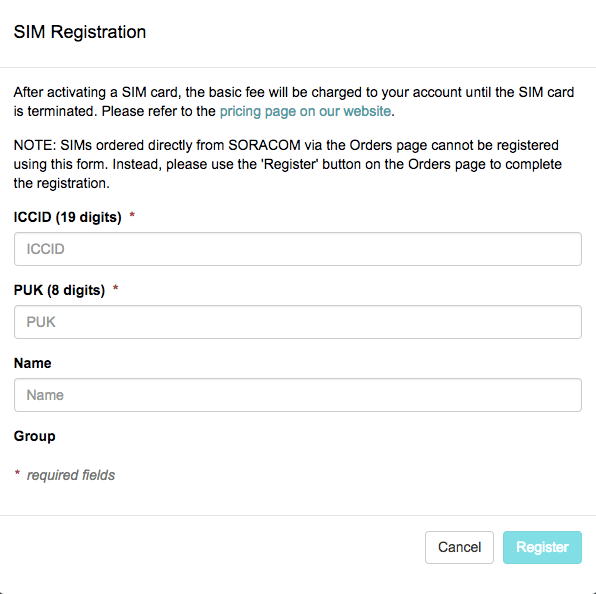 After registering our SIM card, we will remove the SIM chip (shown with the purple circle I’ve drawn around it in the image above). Then we will insert it into Huawei USB Stick Modem. Make sure that you have slid the SIM card all the way in, the right way facing up. 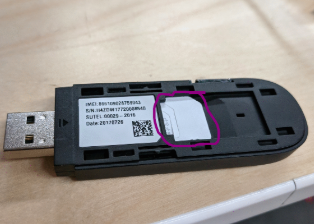 In order to have our Raspberry Pi running on cellular data, we will simply plug the Huawei USB Stick Modem into the USB port of the Raspberry Pi. A solid blue light (not blinking) shows that the modem is successfully picking up 3g data. If it is blinking it means it is still attempting to connect. 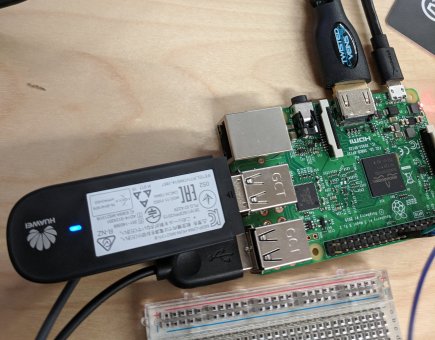 Then to connect our USB Stick Modem to our Soracom Account we must type the following command from our Raspberry Pi terminal. Substitute <ENTER_USERNAME> and <ENTER_PASSWORD> with your respective account credentials.

To make this configuration go into effect, we must reboot our Raspberry Pi.

Now to ensure that your USB Modem is being recognized by your Raspberry Pi’s Network Manager type in:

You should see a ppp0 (your USB Modem) show up. Then type the following 3 terminal commands to ensure that you’ve downloaded Soracom’s ppp route metric script and that the script is run every time the USB modem is plugged in or restarted.

Now, our USB Stick modem should be properly configured. If you’re still stuck on configuring the USB Stick Modem, make sure you read thoroughly over these Soracom docs.

MQTT (Mosquitto) is the name of the protocol we will use in order to publish messages to our PubNub channel from the Raspberry Pi IoT App. In the Admin Console, we will open up the side navigation bar link titled Groups to add a new Group. We will call this new group, Beam-Soracom. Under basic settings for this new group, click on Soracom Beam. Here, we will create a MQTT Entry Point. Ensure that you have the following inputted when creating the MQTT Entry Point. You will need to specify the Destination Type as PubNub. Where you see Credentials Set, we will add our PubNub credentials (Publish and Subscribe Key) to allow our Soracom device to publish messages to our PubNub channel. 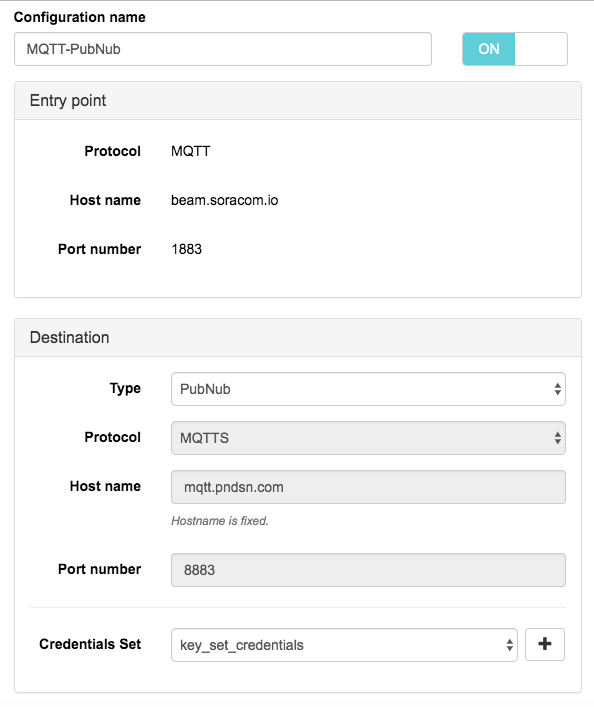 Now, we must install mosquitto-clients package onto our Raspberry Pi, so that we are able to use MQTT’s publish method. In the Raspberry Pi’s terminal run the following command.

With mosquitto-clients installed, we may test our mosquitto_pub command, which we will use to publish a message to our PubNub channel. The format of our mosquitto_pub command will be as follows. After -t we will insert our channel name, parking_spot. And after -m we will insert a test message “test”. Pull up your Debug View on the PubNub Admin Console. Once you run the command below on the Raspberry Pi’s terminal, you should see that the message has successfully been published to our PubNub channel. 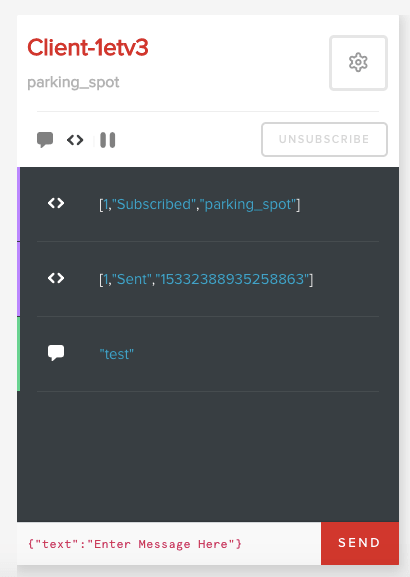 Now our Soracom Air Device is able to successfully publish messages from our Raspberry Pi to our PubNub channel. With this set up, we are ready to start writing the code to publish from the ultrasonic sensor and subscribe from the Android mobile app.

After importing our modules, we must ensure that our GPIO object is using Raspberry Pi Board Pin Numbers. We will do this with the following line.

We must then assign values to our input and output pins. Our input pin is called ECHO and our output pin is called TRIG. ECHO is connected to pin 18 (GPIO 24) and TRIG is connected to pin 16 (GPIO 23), as you can verify on your Raspberry Pi setup. Also we must initialize our occupied variable which we will use to keep track of the last updated status of the parking spot. We will initialize it to False.

Next, we will define our function that will set up our sensor. We’ll name this function setup_sensor(). Here we must define which pin is our input and which is our output. We will call this function later in our main function.

We will use the function get_distance() to obtain the data of how far an object is from our sensor. This function will perform a calculation on how long the pulse signal took to go and come back from the object. Using the time it took, it will compute the distance from the sensor to the object.

We will be publishing our parking space’s availability in the main function of our python script. This will be the function that is executed once the script is started. The main function must do the following actions in order.

To set up the sensor we will call the function we defined earlier, setup_sensor(). Next it will do an initial check to see if the parking space is available or vacant. We will define method initial_check() to do this.

In order to minimize expenses and maximize efficiency, we will only update the status of the parking space if the sensor shows that the status has changed since the last reading. This is shown below:

Our initial_check() function will assign our variable occupied to the current status of the parking space. We must publish this using the subprocess module we imported earlier. With this module, we are able to run terminal commands from a python script. Using the method Popen(), we simply pass an array of strings from the command as you would type it in a terminal. After -m, we want to pass the message encoded as a JSON String, with key “occupied” and value the variable occupied. We can do this by calling our helper method convertToJsonString() which takes a boolean and converts it into a JSON string message that we can send.

Finally, inside our loop that is executed every 5 seconds in our main function, we will have the following code. This will toggle the occupied boolean and then publish it to our parking_spot channel, if it is different from its last updated status.

We must also ensure that our python script can be killed properly. We define close() as the function that’s called when a user kills the script with the command ^C. In here, we can clean up our sensor readings with the line GPIO.cleanup().

Congrats, we have now written a python script that publishes updates of the parking space’s status.

Now that our sensor is successfully publishing data to our PubNub channel, we must set up the mobile app so it is subscribed to the channel containing parking spot availability data.

We must first add the following gradle dependencies into our Module build.gradle file in order to utilize the PubNub Android SDK.

Next, we will add the following Android Manifest Permissions to allow our app to use the internet.

For this mobile app, we will build one Activity, the MainActivity class. This Activity will contain a basic view consisting of 3 UI-Elements. 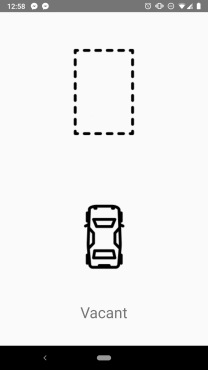 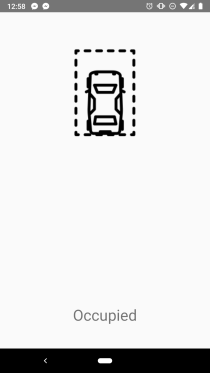 First, we’ll declare the fields of our MainActivity class.

Then, we will instantiate the UI elements with the method findViewById() inside our activity’s onCreate() method. We must ensure that the Main Activity layout file has the following UI elements included with the appropriate ID’s as specified below. The Id’s I’ve chosen are occupiedText, car, and parkingspot. To see my complete layout file, click here.

Now we must instantiate our PubNub instance, so we can make calls to the PubNub API from within our Android App. In order to do this, we will write the following code and pass the Subscribe Key and Publish Key that we generated when creating the app in the PubNub Admin Console.

We will then implement the logic of handling the message. We want to essentially toggle the availability of the parking spot in our mobile app UI by checking its current status of occupancy. Thus, we will check the message just published to our channel to see if the parking spot is now available or occupied. In the case that it is available, we will call our helper method carLeaveAnimation(). In the case that it is occupied, we will call our helper method carEnterAnimation(). Thus inside our message() method we have the following.

That’s it for our mobile app! Now it successfully receives updates from the sensor on the availability of our parking spot.

To start the sensor, simply enter the directory in which your script is located from the Raspberry Pi terminal. Then execute the following command.

You will see that your sensor has now been turned on and is checking the distance readings. Run the Android mobile app and you should see that the mobile app’s UI will update and display the status of the parking spot.

Congrats! We have now built a simple Smart Parking IoT app. For the full source code, click here. By integrating PubNub and Soracom, we have built an IoT app that uses LTE to send real-time messages from the Raspberry Pi. Instead of being restricted by a wifi network, our Smart Parking IoT app is extremely portable and perfect for use outdoors.

For more information on how to link your ultrasonic sensor to PubNub’s real-time data charting framework, Project EON, check out this blog post on our website.