MIMIC MQTT Simulator is a programmable, dynamic simulation platform designed to enable rapid development, testing, and deployment demonstrations of large-scale IoT applications. MIMIC creates a real-world, real-time test lab with thousands of IoT sensors, gateways and devices. And in this case, it allows PubNub users to create a lab full of MQTT sensors and devices and proof-of-concept their IoT requirements.

It’s specifically designed to mitigate risks associated with the deployment of large IoT applications by rapid prototyping of multiple alternatives, and load and feature testing of many scenarios.

Using MIMIC, PubNub users can assure their customers that they will be able to handle the scales of connections, topics, and varieties of messages to work properly when deployed across heterogeneous environments. They can also create a variety of benchmarks to show the scalability for sensors, the volume of messages and topics.

And the good news is, with our recent update to our MQTT support, it’s indeed easy to connect simulated MQTT sensors.

In this case, we’ve have configured our usual Bosch sensor simulation in the MIMIC MQTT Simulator to publish changing temperature values and which are detected in a configured PubNub Function as shown in the PubNub Debug Console below: 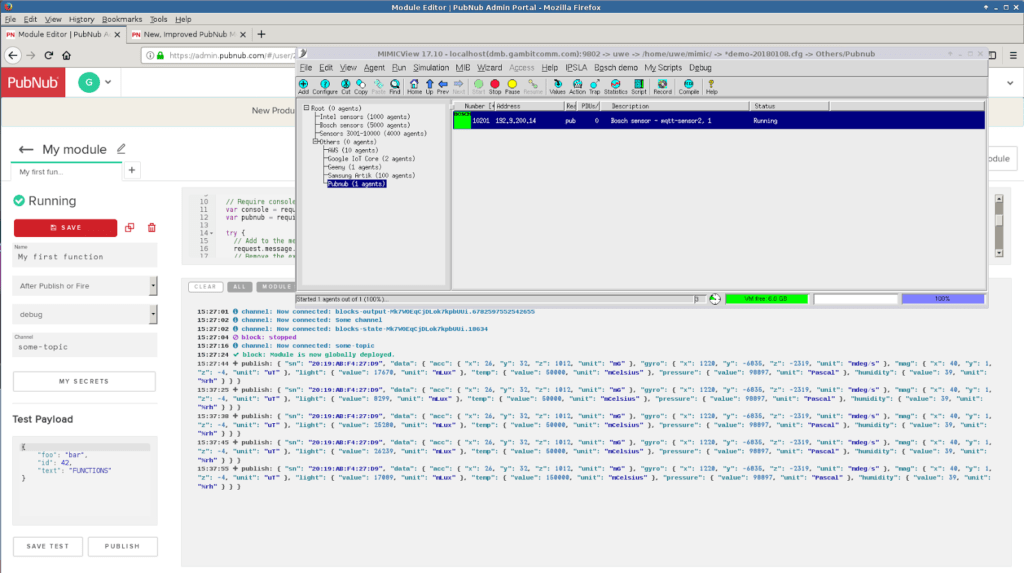 In the 1-minute demo video below, you’ll see the sensor publishing diverse telemetry data including acceleration, humidity, temperature, and pressure every 10 seconds. After a couple of intervals, we change the temperature in real time through the MIMICview GUI from 50 C to 150 C. The configured PubNub Function detects the published values and prints them in the debug console.

What we’re doing interactively through the GUI can instead be done programmatically for any number of sensors at will, and will reproduce any required scenarios.