Building your IoT app just got as easy as assemble, connect, and prototype. Today, we're excited to announce our partnership with the AT&T IoT Starter Kit, enabling developers to build and deploy ...

This is super exciting. You can now harness the power of AT&T’s reliable wireless broadband network, combine it with the IoT Starter Kit hardware, and connect it all with PubNub. Stream temperature readings, plot geolocation coordinates, or trigger a smart device action from anywhere on Earth in real time.

We’re also excited to announce that we’re partnering with AT&T for the upcoming Real-time AT&T IoT Starter Kit Challenge on Hackster.io. Harnessing the power of AT&T’s new IoT Starter Kit, Flow, and PubNub, hackers across the United States will contend to see who can build the most innovative IoT app. With a ton of great prizes, we hope to see your app!

Before you begin, be sure you first:

Device Initialization and Setup with AT&T

Once you have setup the hardware, in order to view debug information directly from the device, you’ll need to setup a Terminal app, and connect the AT&T IoT Starter Kit with it. We’ve had great success with Tera Term, but you can use whichever terminal you prefer. Just be sure you set up the serial configuration correctly — check out this reference from mbed.org on how to setup terminals with your device (including Tera Term).

Installing and Running the Sample Project

PubNub and AT&T have made it really easy for you to be publishing and receiving messages in real time using the ready-to-run PubNub for AT&T IoT Starter Kit client SDK and demo application. We’ll walk through the simple steps of getting it up and running:

As noted earlier, you’ll need to have your mbed.org credentials to login to mbed.org. Once you’ve signed up, login to the mbed.org developer site. 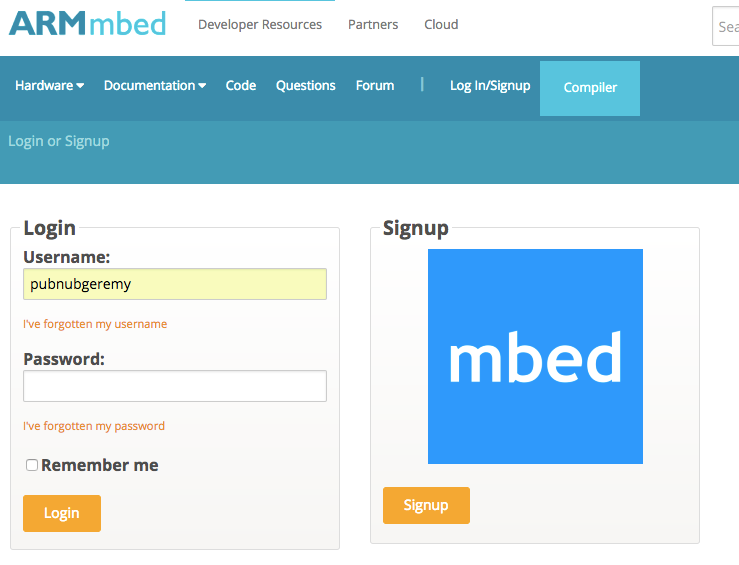 After you’ve logged in, head straight to the demo app’s mbed home page. Once on the page, click Import into Compiler. 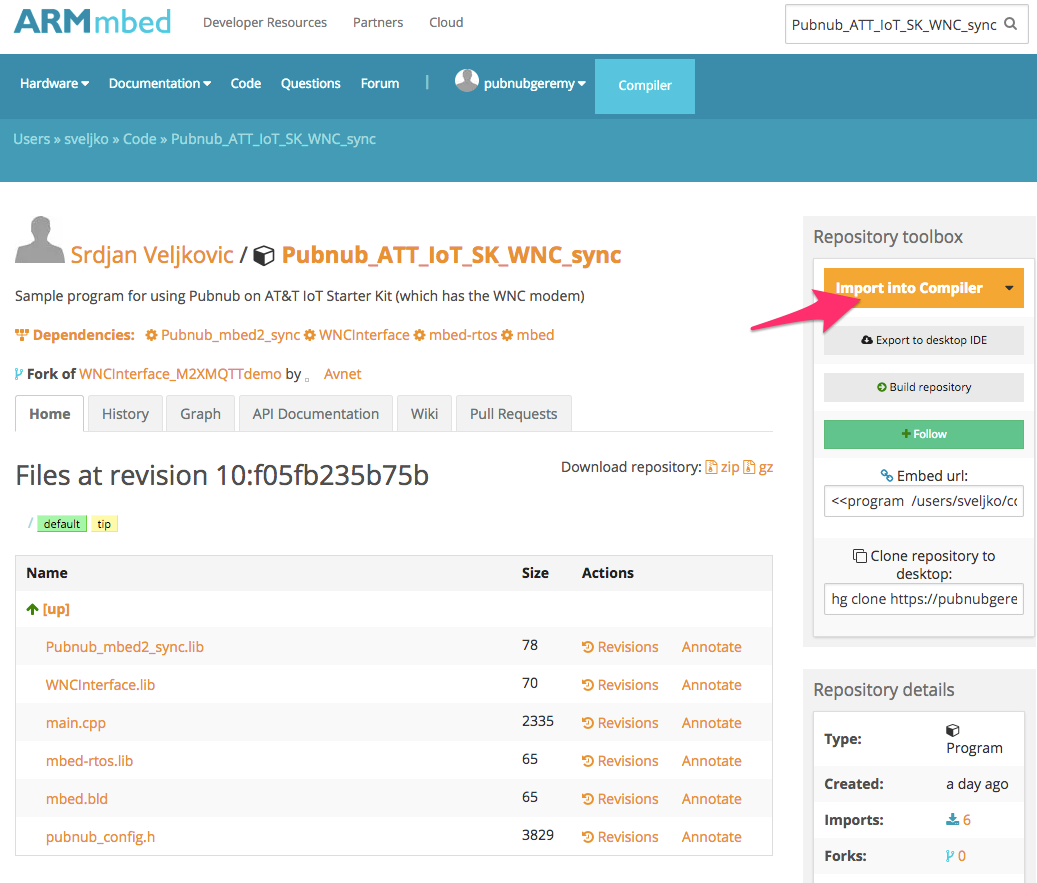 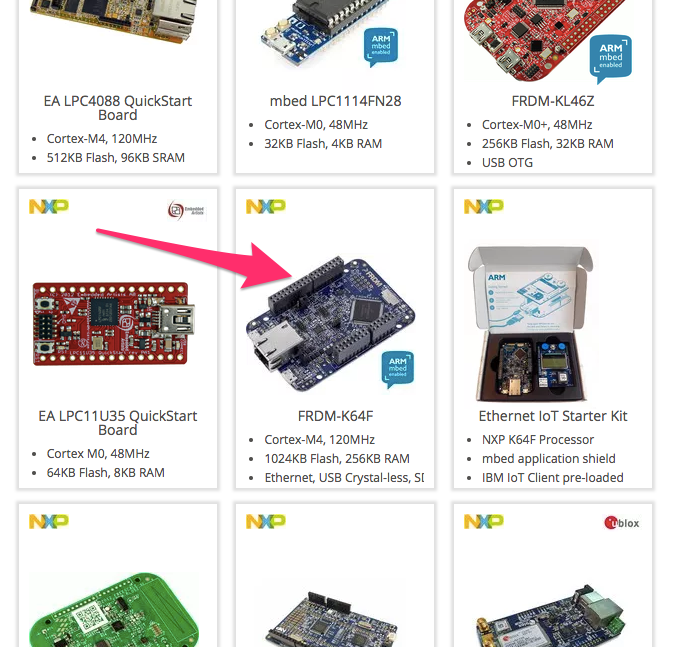 In addition, mbed.org may prompt you to install a template. If so, just accept the default template and options.

If you feel out of sync or disoriented after being prompted by these potential extra steps, don’t worry! You can always restart from the top of this Login to mbed.org section without any negative side effects.

After you click Import into Compiler, you will be brought to your IDE workspace, with the Import Program dialog in focus: 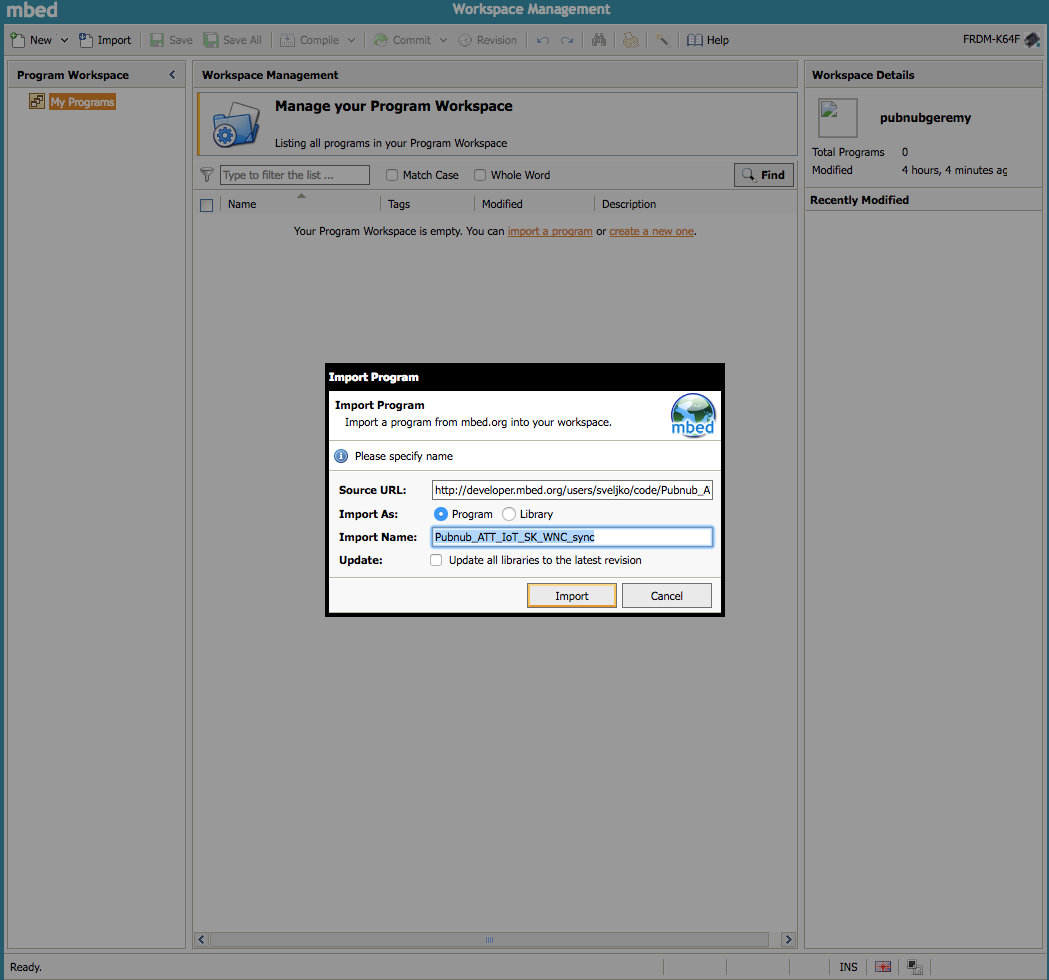 You can safely accept the defaults, and click Import.

After the program imports, the dialog will disappear, and the IDE will display the demo application loaded into the mbed.org IDE: 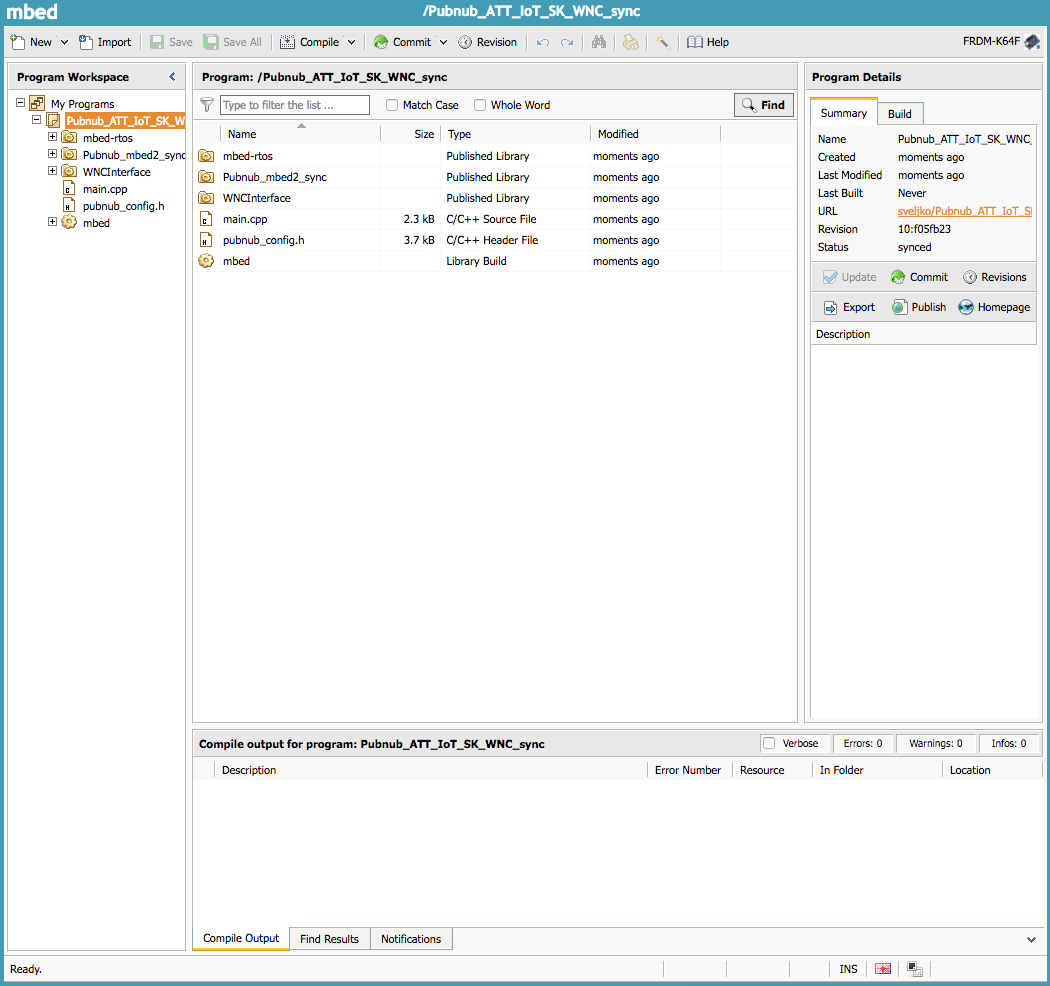 Before we move on to the compile step, let’s quickly take a look at the anatomy of this project to better understand what it will be doing.

Of specific interest are the WNC modem library (WNCInterface) and PubNub Sync interface library (pubnub-mbed2-sync.) As one may expect, these libraries provide the interface to the cellular modem stack, as well as the PubNub logic layer that rides on top of it.

If we click into main.cpp, we’ll see about 80 lines of code that makes up our actual demo application. Reading from top to bottom, we see the code that:

It’s really barebones and is intended as a starting point if you’re building your app from scratch and need a ready-to-build off PubNub configuration as a foundation. Feel free to tweak it as you need! But before you do, lets see how it runs out of the box.

The app comes set up with some sane defaults. These defaults enable us to run the app out of the box to test it before proceeding with any customizations.

To compile it, just click the Compile button located at the top of the IDE:

Upon successful compile, a file called Pubnub_ATT_IoT_SK_WNC_sync_K64F.bin is prompted for download. Download this file to your hard drive.

To deploy to your AT&T IoT Starter Kit hardware, connect it to your PC or Mac per the AT&T Quickstart guide instructions. You should see an MBED device drive mapping appear on your PC or Mac. For example, on PC, it may look something like this in File Explorer: 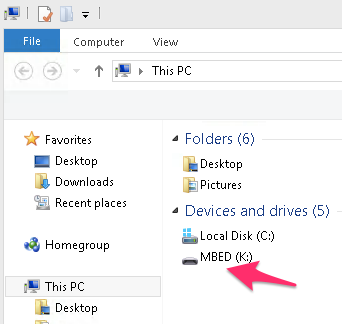 To deploy this app to the device, just drag the file Pubnub_ATT_IoT_SK_WNC_sync_K64F.bin to the MBED drive.

Make sure your terminal app is connected to the AT&T IoT Starter Kit hardware: 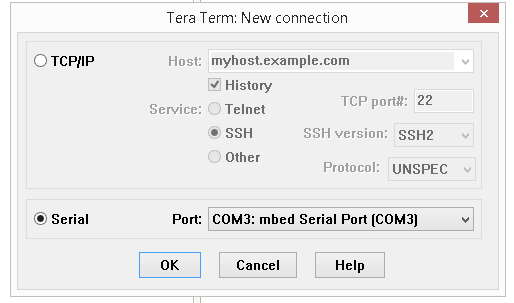 And then power-cycle the AT&T IOT Starter Kit device.

Keep an eye on the hardware-connected terminal as the device comes back up after power cycling. After 30s or so, you should begin to get output of the modem I/O: 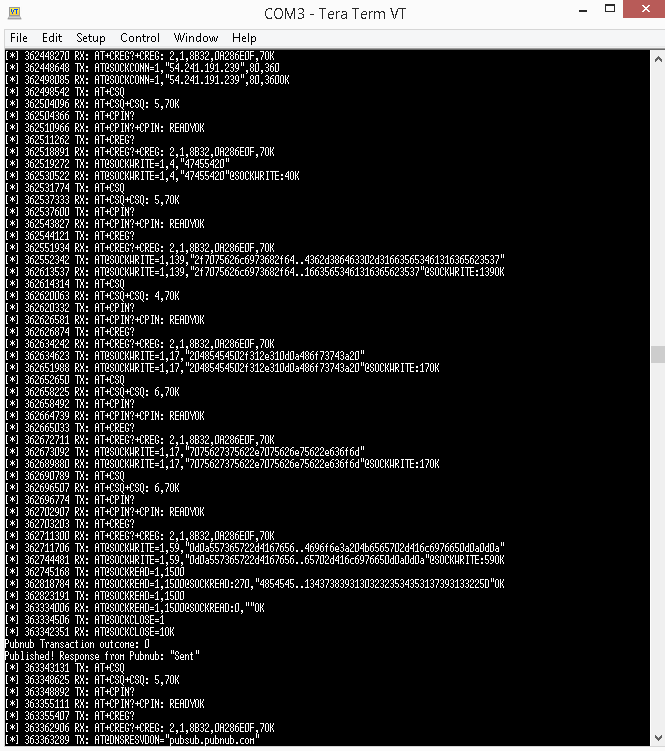 If you can see the above output, you’re in a good place!

In addition to debugging on the hardware device, you can also debug the PubNub message data on nearly any platform, including web.

This link provides a pre-configured console connecting with the demo keys and the hello_world channel.

If you end up using your own keys and/or changing the channel name, you’ll need to change the values in this console to reflect that, and click Unsubscribe then Subscribe again for the changes to take place. 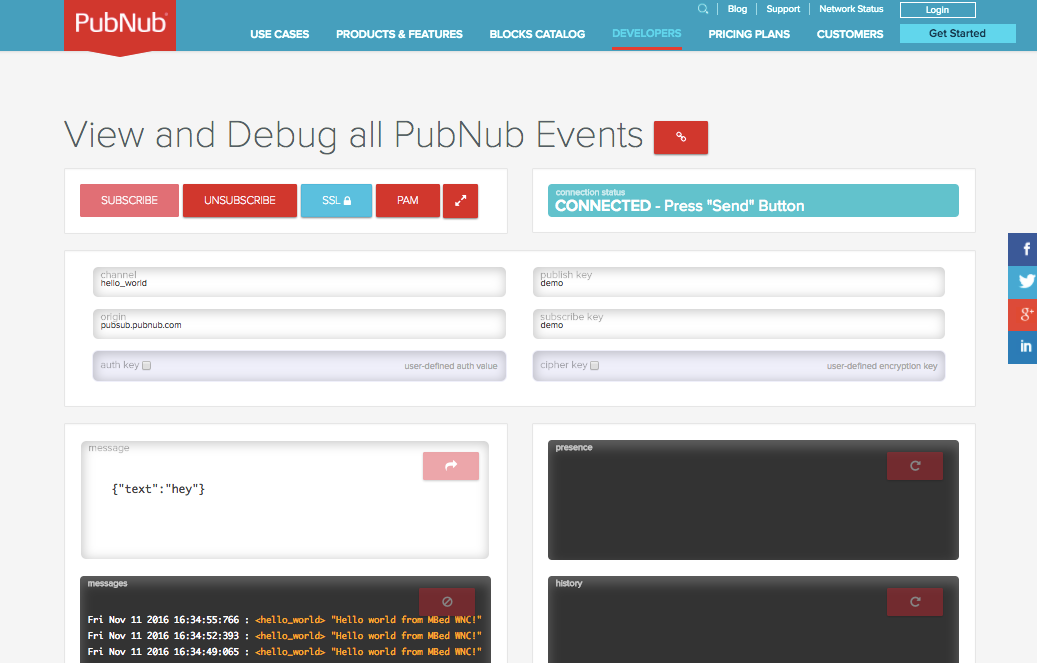 Modify The App To Run With Your Keys and Your Logic

Once you’ve verified the app runs with the defaults, it’s easy to begin tweaking it to perform custom logic. The first major configuration changes are to switch from the default keys to your own keys.

Changing this line will accomplish that:

Next, to change the channel it is publishing and subscribing on, changing the second parameter in the publish and subscribe calls will accomplish that task:

If you already have an existing AT&T IoT Starter Kit project, you can just as import PubNub into it as well:

1. Import the Pubnub library by URL:

2. If your MBed project/program doesn’t already use it, import the WNC modem library by URL: http://developer.mbed.org/teams/Avnet/code/WNCInterface/#75cf1e1c921c

NOTE: The latest revision at the time of this writing has build issues, but we don’t need it, so use the specific revision from the above URL.

3. Add a `pubnub_config.h` to your program. You can copy the contents from the sample program ( https://os.mbed.com/users/sveljko/code/Pubnub_ATT_IoT_SK_WNC_sync/file/dcb02cfdc63c/pubnub_config.h/)

and then tinker with it, if you wish. All the “knobs” are documented, so here we’ll look at only the “where to log” configuration, near the end of `pubnub_config.h`:

This expects that in your program somewhere you define the `MODSERIAL pc` global object. In the sample program, it’s defined in `main.cpp`:

Of course, you can `#define PUBNUB_LOG_PRINTF(...)` to whatever you wish to use for PubNub logging.

4. If your MBed project/program doesn’t already use/initialize it, initialize the WNC modem/library. Just define an object of class `WNCInterface` and then call its `init` and `connect` member functions. This is how it’s done in the sample program at https://os.mbed.com/users/sveljko/code/Pubnub_ATT_IoT_SK_WNC_sync/file/dcb02cfdc63c/main.cpp/:

5. After the modem has be initialized, you can use the Pubnub C-core APIs like on any other supported platform.

This tutorial served as a general introduction to using PubNub Data Streams with the AT&T IoT Starter Kit. Publish and Subscribe operations, along with setup and debug against a new or existing app were demonstrated.

If you have any feedback or support questions please feel free to contact us at support@pubnub.com.

If you’d like more info on seeing PubNub work with AT&T, check out these webinars on AT&T Flow Designer and the AT&T Iot Starter Kit: