Hello, and welcome back to our series on Voice Activation in Real time web applications. In this article, we will add dictation (speech-to-text) in our real-time AngularJS web application with just 79...

Hello, and welcome back to our series on Voice Activation in Real time web applications. In this article, we will add dictation (speech-to-text) in our real-time AngularJS web application with just 79 lines of HTML and JavaScript. Services and products such as Amazon Echo, Siri and Google Now use speech recognition as part of their voice user interfaces. As these devices gain popularity, user behavior and expectations are shifting from web-based to voice-based user experiences in many everyday settings.

Diving into the Code

First up, like last time, we have the JavaScript code & CSS dependencies of our application. 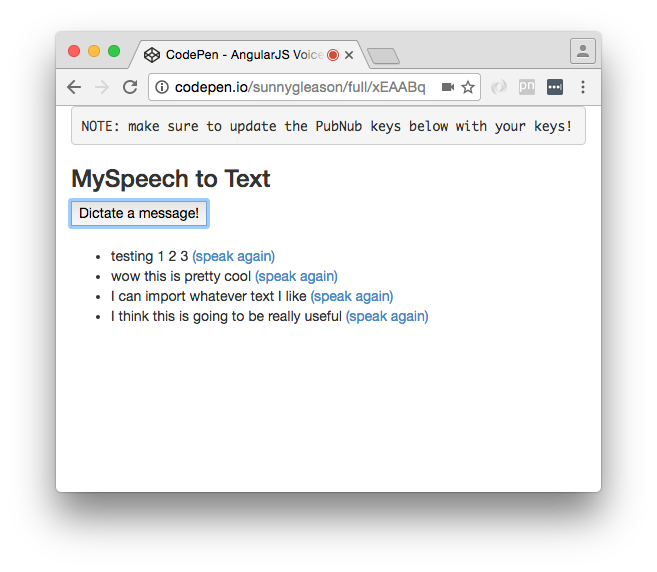 Actually, there is also the need for the user to allow microphone access to the site as well: 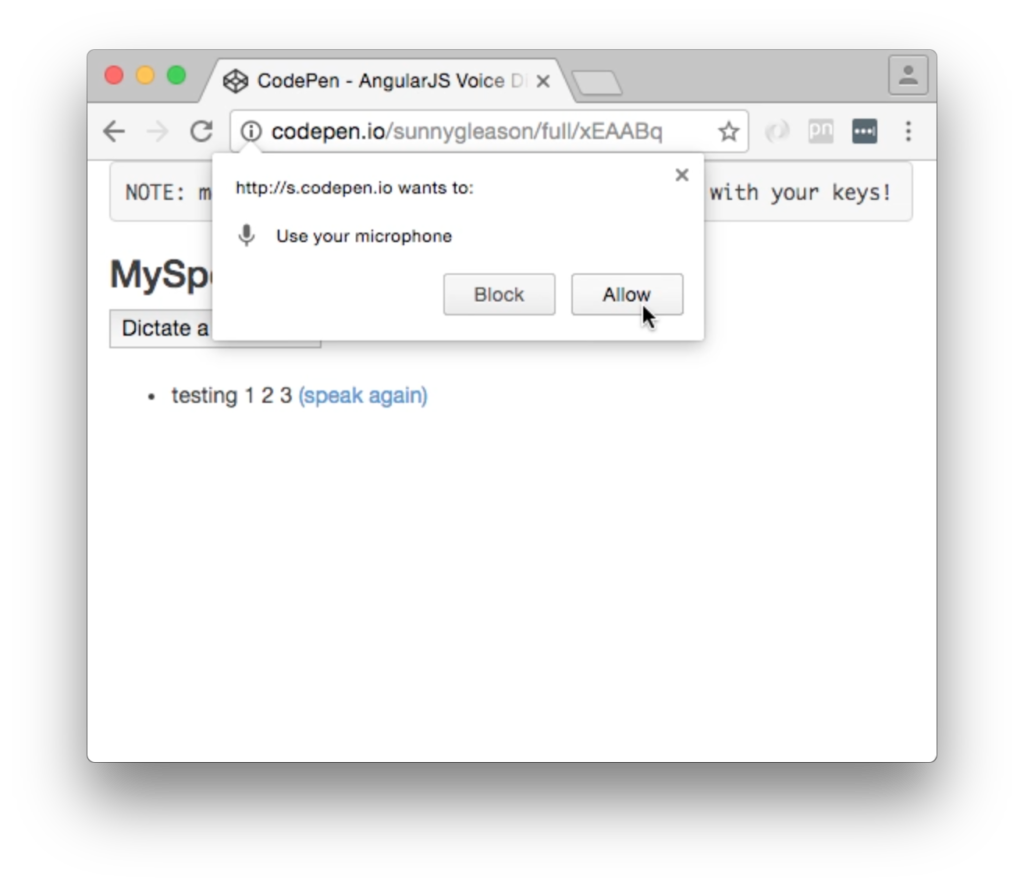 The UI is pretty straightforward – everything is inside a div tag that is managed by a single controller that we’ll set up in the AngularJS code. That h3 heading should be pretty self-explanatory.

We provide a single button to dictate a message to send to the PubNub channel. Much simpler than keyboard input, for sure!

Our UI consists of a simple list of messages. We iterate over the messages in the controller scope using a trusty ng-repeat. Each message includes a link to allow the user to speak the text (using our text-to-speech feature from the previous article).

The first lines we encounter set up our application (with a necessary dependency on the PubNub AngularJS service) and a single controller (which we dub MySpeechCtrl). Both of these values correspond to the ng-app and ng-controller attributes from the preceding UI code.

Next up, we initialize a bunch of values. First is an array of message objects which starts out with a single message for testing. After that, we set up the msgChannel as the channel name where we will send and receive real-time structured data messages.

We initialize the Pubnub object with our PubNub publish and subscribe keys mentioned above, and set a scope variable to make sure the initialization only occurs once. NOTE: this uses the v3 API syntax.

The next thing we’ll need is a real-time message callback called msgCallback; it takes care of all the real-time messages we need to handle from PubNub. In our case, we have only one scenario – an incoming message containing text to speak. We push the message object onto the scope array and pass it to the sayIt() function for text-to-speech translation (we’ll cover that later). The push() operation should be in a $scope.$apply() call so that AngularJS gets the idea that a change came in asynchronously.

In the main body of the controller, we subscribe() to the message channel (using the JavaScript v3 API syntax) and bind the events to the callback function we just created.

Next, we define the sayIt() function, which takes a text string and passes it to the Text-To-Speech engine. It should be familiar from the previous article.

Not too shabby for about eighty lines of HTML & JavaScript! For your convenience, this code is also available as a Gist on GitHub, and a Codepen as well.

There are a few other features worth mentioning in the Web Speech API.

Speech recognition language may be configured by using the appropriate ISO language code.

There are two modes of working with Speech Recognition – continuous or not. In continuous mode, speech will be streamed over the network for recognition and callbacks will be invoked accordingly. This means that the developer is also responsible for ensuring recognition.stop() is called appropriately when dictation should stop. In non-streaming mode, only a single recognition result will be returned, and calling stop() is not necessary.

Also, the speech API provides for interim results. Often times, faster, lower-quality results are available for user feedback before higher-quality, final results come back. If you would like to display interim results in your application, you can enable interim results and look at result objects where isFinal is false. You’ll probably need to whip up some UI magic to display the “pending” text in a sensible way; I’ve seen SPAN tags with text selection look-and-feel in other examples.

Finally, there are a bunch of events that the UI can hook into. The onstart() event is probably a good place to do the “stopped” to “started” mic icon switch, and vice versa for the onend() event. The onerror() event will come in handy for bulletproofing the user experience.

Thank you so much for joining us in the Speech Recognition article of our Voice Activation series! Hopefully it’s been a useful experience learning about voice-enabled technologies. In a future article, we’ll dive deeper into the Speech APIs and use cases for voice commands in real time web applications.