Magic Leap vs. Microsoft HoloLens: Which One Should You Buy?

We tested both the Magic Leap and Microsoft HoloLens augmented reality headsets and walkthrough the pros and cons of each.

We got our hands on a Magic Leap augmented reality headset and I had the opportunity to test it out and experiment with the developer SDK. After reading initial reviews about the product online, I was skeptical whether the company’s multibillion-dollar valuation would result in a high-quality AR experience. I also had the opportunity to fly to Washington to visit Microsoft HQ to try out the HoloLens in person.

In this post, we’ll compare the Magic Leap and the HoloLens, summarize the main differences, and highlight the weaknesses of each device. 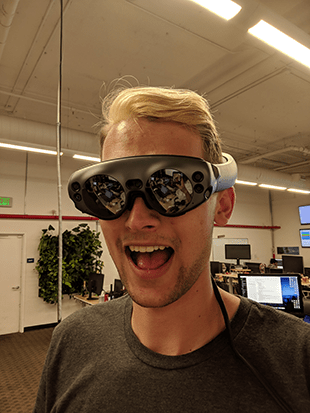 The Magic Leap is a comfortable device to wear and use. The headset itself is not heavy which allows it to fit comfortably on your head, and it doesn’t feel like it is going fall off your face while using it.  Additionally, the computer which powers the device fits right in your pocket which allows you to walk around the room freely without tripping on cords.

The Magic Leap remote worked well and felt like a seamless way to interact with the virtual world, and does a great job at scanning the room to make virtual objects pop out on top of objects in the real world.

The device came with two fun demos to test out, one was a trippy 3D interactive demo which turned my room into some sort of weird alien catacomb (check out the gif above).  The other was an interactive sandbox where you could place 3D objects into the world and watch how they interact with each other. Additionally, you could use the controller to paint in your virtual room by writing graffiti on the walls and placing stickers on real-life objects.

Currently, there are only a few applications available since the device is new and developers haven’t had the opportunity to create fully fledge applications yet for the Magic Leap.  However, in the coming years, I see the platform producing a lot more content, especially once the price of the device drops so consumers can afford it. 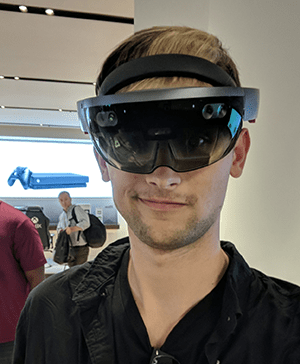 The Microsoft HoloLens is an all-in-one augmented reality unit with a heads-up display that rests above your line of sight.  In order to use the HoloLens, all you need is your fingers and different gestures to scroll through menus, click on objects and move objects around in the virtual space.  Controlling the device with gestures took a little while to figure out, but once I understood how to control the cursor, the gestures seemed to perform well.

However there were a few instances where I would attempt to select an object, and the HoloLens wouldn’t detect my gesture correctly.  This would cause the object to not be selected and I would have to retry the gesture.  In order to select something with the cursor on the HoloLens, you have to slightly tilt your head to align the cursor with the object you are trying to select.  Since the HoloLens is heavier than the Magic Leap, I kept feeling like the device was slowly falling off my face while using it.  I kept having to adjust the screen on the HoloLens since the device wouldn’t stay still on my head while I was moving my head around to select objects.

Additionally, the screen portion only rested at the top portion of my eyesight, which felt more like I was wearing Google Glass rather than an immersive AR experience.  The field of view was even more limited than the Magic Leap and felt further away from my eyes.  The demos were very bright and colorful, and the actual picture quality was great, however with a limited field of view the experience didn’t feel as immersive as the Magic Leap.  The Microsoft HoloLens has been out for a few years now, which means there are way more applications currently available made by the developer community.  One of my favorite demos I got to try out was placing a green gecko on a table in augmented reality.

Even though both augmented headsets offer similar experiences, I think Magic Leap offers the best overall experience for the end user.  Using the controller gave me more control of the objects of the virtual world, and the overall experience seemed more immersive and realistic.  Even though the HoloLens was a great experience, it is a few years old and technology has improved drastically since then.

I think both headsets though have their flaws, the biggest being the field of view problem.  Once Augmented Reality can get to a point where the device provides a 180 degree field of view, I think we will see it overtake and surpass the Virtual Reality market.  The future for augmented reality will be when multiple people can wear the headsets, and play games with their friends in a virtual world.

Using and setting up PubNub on the Magic Leap was incredibly simple and within a matter of days, we were able to develop a working application which can communicate across multiple Magic Leap devices.  To learn more, stay tuned on our blog to read the tutorial on how easy it is to make a real-time video game for the Magic Leap.  Both pieces of technology still have a far way to go to be perfect, however, the potential for these devices is endless.