This DIY Arduino project shows you how to build an Arduino alarm for frozen pipes that is triggered based on temperature.

With Winter in full swing, cold temperatures are undoubtedly on their way. Or in the the case of Buffalo, it appears the frigid, wintry air has already arrived. If you live in such a climate, like Maker Jason Poel Smith, the possibility of your pipes freezing is an ongoing concern.

While there are countless preventative measures that you can take, such as insulating pipes or leaving the water dripping, Smith had selected to go the DIY route by designing a simple alarm that alerts him when the pipes are in danger of freezing. 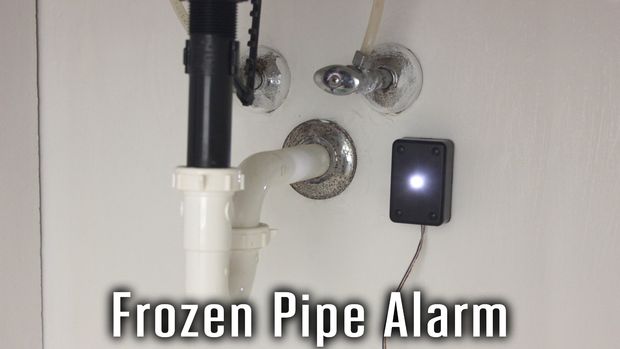 In a recent MAKE: Magazine feature, Smith compiled a step-by-step guide for those looking to create a makeshift anti-freeze contraption using an Arduino Uno (ATmega328), a thermistor, an LED light, a piezo buzzer, among a few other components.

Once the sensor has been calibrated and affixed near your pipes, the DIY alarm will sound along with a flashing LED notifying a homeowner when the temps dip below 32°F.

Get ready for the chilly months ahead by protecting your pipes. Check out the Maker’s entire project page here.

This is a guest post from Atmel, and was originally published to the Atmel blog on November 24, 2014. Atmel Corporation is a worldwide leader in the design and manufacture of microcontrollers, capacitive touch solutions, advanced logic, mixed-signal, nonvolatile memory and radio frequency (RF) components.

In fact, we built an Arduino-controlled smart home using PubNub, and the whole story can be read here.

You can find the Arduino PubNub extensions here. For additional resources, check out the PubNub Arduino documentation page. We also make connecting Arduino with the PubNub Data Stream Network easy (in fact, it only takes two steps).