How to detect and stream location data to a live-updating map for Android with Android geolocation tracking and the Google Maps API.

🔔  Before we begin this tutorial, signup for a PubNub account to get your API keys. We’ve got a generous sandbox tier that’ll cost you nothing until it’s time to scale! 🔔

This is a 4-part tutorial on building real-time maps for Android using the Google Maps API and PubNub. We’ll begin with basics, to get your Android environment set up, then add real-time geolocation functionality in Parts 2-4.

In the end, you’ll have a basic Android location tracking app with map markers, device location-tracking, and flight paths, powered by the Google Maps API and PubNub. 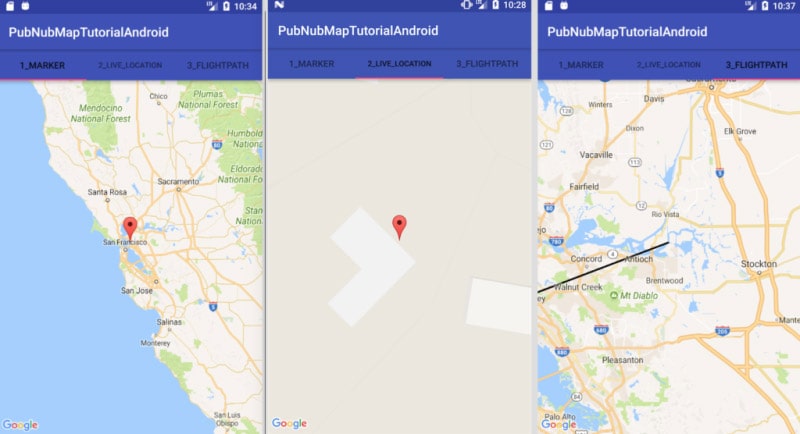 For this tutorial, we presume you are working with an Android application running Version 23 (Marshmallow) or higher, as this tutorial is intended primarily for mobile devices.

The code for the example used in this tutorial series is available in our GitHub repository. It’s visible via the web UI as well as by using Git to clone the folder to your local machine.

To get started, you’ll first need your PubNub publish and subscribe keys. If you don’t have an account, you can sign up here, and your pub/sub keys are available in the Admin Dashboard. The keys look like UUIDs and start with “pub-c-” and “sub-c-” prefixes respectively.

To integrate with Google Maps, you’ll need to create a Google Maps API key. To do so, check out this getting started guide.

This creates a unique API key that can be locked down to whatever Android apps you like. You can manage your credentials in the Google API console here.

The core PubNub feature we’ll use is Real-time Messaging. Our application uses a PubNub channel to send and receive position changed events.

The Google Maps API provides an Android Map widget that displays a map based on your configuration. The map size, map center latitude and longitude, zoom level, map style and other options may be configured to your initial preferences and updated on the fly.

It also provides an initialization callback option that calls a function you specify when the map is loading. You can use features like Map Markers and Polylines which allow you to place friendly markers and flight paths on the map at the location(s) you specify. All the points are user-specified and may be updated in real time as updates arrive.

Working with the Code

First, clone the code onto your local machine using Git or the import project feature of Android Studio. Once the project is imported, you’ll be able to modify the files using the IDE like this: 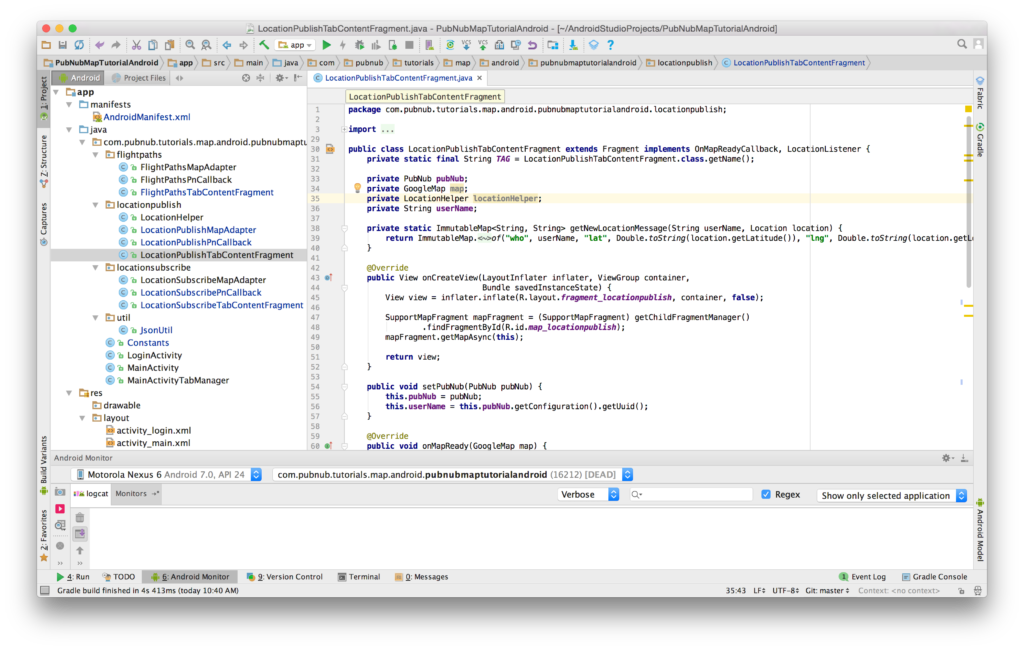 Once you’re in the IDE, you’ll be able to perform the minor code changes to get the app running quickly.

We include the PubNub library for real-time communications in the build.gradle file.

You’ll also want to include the Google Maps API via Play Services. At the time of writing, the relevant version is 11.0.4.

There are a few key permission settings you’ll need to set up in your AndroidManifest.xml.

While you’re in there, you’ll also need to update the Google Maps API key you set up earlier:

We’ve taken the approach of encapsulating common settings into a Constants.java file – for example, the PubNub publish and subscribe keys mentioned earlier in this tutorial.

To run the code, you just need to push the green “play” button in the IDE. That will bring up the Android device chooser so you can choose where to run the app. We typically run our apps using emulation first since it’s quicker.

Once you get the hang of that, it’s easy to connect an Android device via USB for live debugging. This is especially handy for testing live location tracking, which isn’t as practical in the emulator.

With that, we now have our app set up. In Part Two, we’ll implement live map markers, which identify where a device is located on a map.