In this blog post we'll take a look at the 5 challenges that IoT connected car developers are facing, and how the PubNub Data Stream Network can be used.

Our cars are becoming increasingly connected. We’re building real-time transportation management, dispatch, navigation, and tracking applications, and embedding them directly into our vehicles. With such an explosion in the connected car space, the real question is, how are we going to connect the millions of cars on the road? It starts with a real-time data stream network for the Internet of Things.

In addition to Todd’s talk, we also had an Autotech Council Developer’s Challenge, where a couple teams using PubNub won both 1st and second prize!

The Autotech Council was launched in 2012 by 50 auto industry execs based in Silicon Valley and includes Toyota, Nissan, Volkswagen, Renault, Intel, Qualcomm and over 250 vendors, startups and VCs in the automotive space. PubNub was brought in to present The 5 Challenges of Connected Cars, and how a global data stream network can address these challenges.

How can you communicate between connected cars, servers, and client apps anywhere on Earth? Typically people think of making request/response type of calls to get data from devices. On the PubNub Data Stream Network, connections to every single device in the world are opened, and keep a socket connection open in a very low-power, low-cost way. This enables the streaming of data bi-directionally across each open socket. With one line of code, IoT developers can power one-to-many or device-to-device connections. That works around the world with fifteen points of presence globally; each car connects to its local point of presence whether it’s in Tokyo, Amsterdam, or Northern California.

With 15 global data centers, that’s a recipe for reliability. For example, when a car drives into a tunnel, our network knows something about that data stream, and we’ll cache data as your car goes into the tunnel and then when it reconnects to the LTE network as it drives out the other side, our network will burst that data back down to the car. 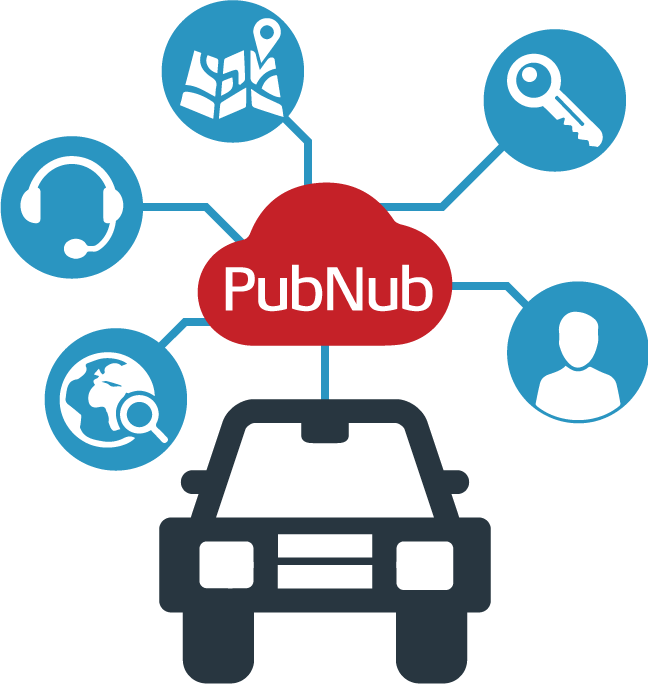 Just like signaling, security is paramount. PubNub not only provides a layer of encryption, but access control as well. With PubNub Access Manager, developers can control who is publishing or subscribing on a channel-by-channel basis. PubNub also provides connectivity without opening ports on a device, which ensures compliance with corporate firewalls and VPNs. When streaming data to or from a car, it opens up a connection to one of PubNub’s points of presence, and data only streams to and from that point of presence. Legislatively, you can route traffic around certain regions of the world.

PubNub can keep socket connections open with very low battery drain. You can keep a socket open to a car with 1/10 second latency guarantees; let’s say you publish data to unlock the door of a car. You can keep that connection open for literally 45-60 days while the car is off without killing the battery.

When your devices are connected to one of the PubNub points of presence, you want to know who is online and who is offline. Using PubNub Presence, know which of your devices are online or offline in real time as connections are made and dropped. For taxi, shipping, freight, and delivery management, custom presence functionality is a vital component of the business, providing real-time custom vehicle and device states, such as vehicle and cargo capacity, location data, and device health.

PubNub addresses all these challenges with very low bandwidth usage, generally less than 40 bytes per minute.