Why you Need a Data Stream Network for Internet of Things

As hardware gets cheaper and devices get smarter, the world moves towards being always-on and forever connected. This means that more and more data is constantly being sent and received. Tra...

As hardware gets cheaper and devices get smarter, the world moves towards being always-on and forever connected. This means that more and more data is constantly being sent and received. Traditionally it was only mobile phones, computers, and servers talking to each other, but nowadays, that list includes everything from light bulbs to fridges to automobiles. This is the Internet of Things. At its core, it's connected devices communicating bidirectionally with one another in real time. It's also the reason for our Data Stream Network.

Breaking down the Internet of Things

So what are the different components that make up an IoT application? 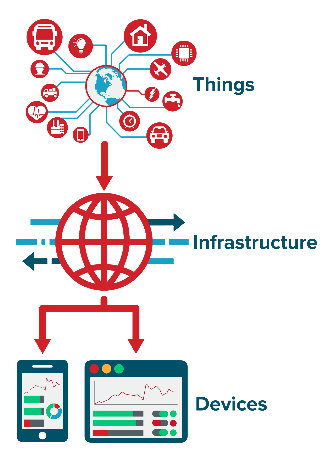 The Things that make up IoT

The ‘things’ make up the physical world of the Internet of Things. Let us consider those that have an IP address and can talk TCP/IP. They’re used in your home, factories, garden, hospitals, and your transportation fleet. These “things” come in a variety of shapes, sizes, and more importantly hardware platforms. They run different operating systems and communicate using different protocols. With so many different combinations, your head might be spinning with where to begin, what hardware to use, and down the road, how you’ll scale your network of ‘things’ to millions of users.

The Infrastructure / Software that powers IoT

Regardless of hardware, platform or operating system, the devices' most basic need is to communicate with each other. They need to send (publish) and receive (subscribe) messages, and take some actions based on the information passed around. A service or infrastructure is needed to route the messages, to store/cache them for later usage and to deliver them to other devices in real time, irrespective of their location in the world.

The End Devices / Platforms that contribute to IoT

The end users of any IoT application need to get as seamless an experience as possible, regardless of whether they use a mobile phone, a PC, or a tablet. They could be running different operating systems or using different browsers, but they all expect the same information, presented in a useful manner, with great visualization.

Starting with the devices to the software running on them, to the infrastructure that runs the whole show, there are a number of pain points when it comes to building and scaling an Internet of Things application:

When building any application, developing the application logic is only part of the process. Deployment and scaling the application worldwide and to several users are the ongoing problems that require more effort. One way to approach IoT is to build all the separate pieces(hardware, software, network, security etc.) individually, and put them together. Or you can use a solution off the shelf, that solves most of these pain points to begin with. All you are left with then is the application logic and user experience.

A data stream network does exactly the latter for you. It helps you build and scale always-on applications in a secure, reliable manner, connecting devices from anywhere in the world in real time. It provides services such as bi-directional communication between devices, visualizations and presence information about the devices on a channel for real-time data.

These networks have found their place across the vast landscape of IoT applications, from consumer apps like taxi dispatch, home automation, connected car, and wearables, all the the way to the industrial IoT, including freight and shipping, manufacturing, and agriculture. A Data Stream Network like PubNub will take care of everything from data streaming, security, data centers availability, scaling, multi platform support and also provide easy to use APIs to build applications on top. In short, it will solve all the problems mentioned above, and let developers to do what they do best… develop applications.

This article is using icons from the Icons8 library.