How to collect acceleration readings from an accelerometer and stream the data in real time to a live-updating, real-time dashboard with Intel Galileo.

In this blog post, we’ll connect an Accelerometer to the Internet and stream the acceleration data in real time to a live-updating, real-time dashboard, powered by an Intel Galileo. Accelerometers are in smartphones, rockets, navigation systems, and even structures. 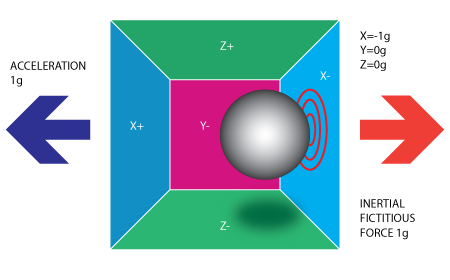 This is how an accelerometer works. The only difference is there is some component to measure the force of the ball hitting a wall. It also happens on a much smaller scale, about the size of your fingernail. 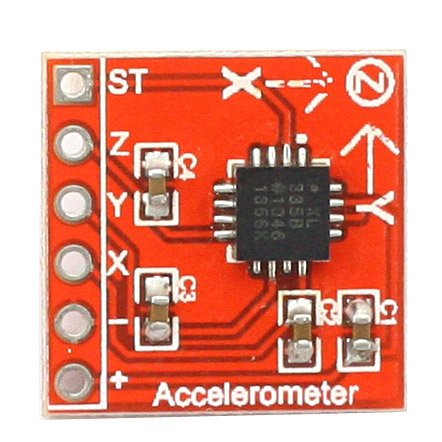 For this demo we’re going to be using the SainSmart ADXL335 Triple Axis Accelerometer. The sensor is a polysilicon surface-micromachined structure built on top of a silicon wafer. Polysilicon springs suspend the structure over the surface of the wafer and provide a resistance against forces due to applied acceleration, As described in the data sheet.

Here are some specs:

We’re going to use Intel Galileo; Intel’s flagship IOT prototyping chip that runs NodeJS. Check out the last post where we connected a potentiometer to Intel Galileo.

First thing we need to do is solder headers to the accelerometer. Soldering headers is very simple. Just insert some headers into the provided points, touch solder to the connection, and then touch the soldering iron. 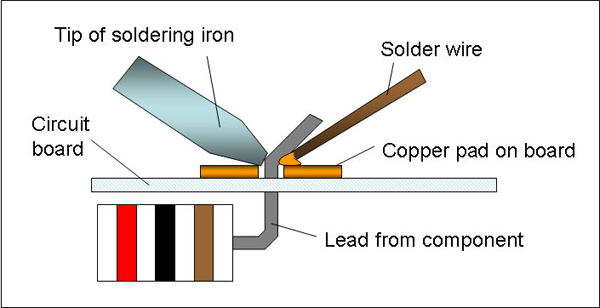 When you’re done, you’ll have an accelerometer you can plug into anything.

Wiring the Accelerometer into the Galileo

Great, now let’s wire the accelerometer. This particular device is really simple, there are 6 connections.

Thanks to the header pins we just soldered, we can simply plug the accelerometer into our breadboard. Take 5 jumper cables, and wire them to each of the connections (excluding ST). 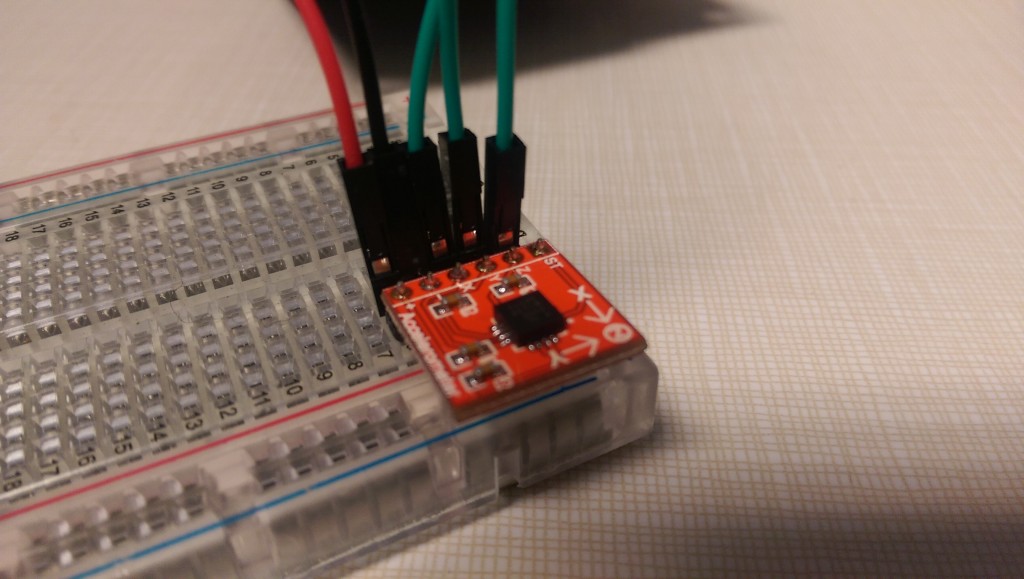 I used green for x, y, and z, red for power, and black for ground. Now plug the other ends of the jumpers into the Galileo. Note that you need to use 3.3v power and not 5v. 5v will damage your accelerometer.

Here’s what mine looked like when I was done connecting everything: 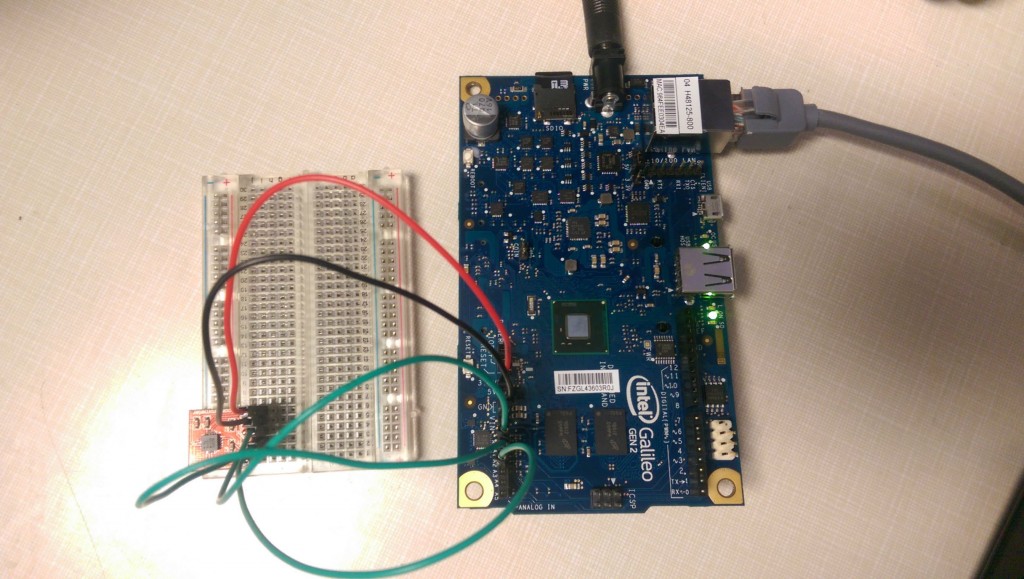 Now we’re going to read the accelerometer data using Node.js and publish it via PubNub Data Streams so we can display it in real time on our dashboard. Load the Intel XDK and start with a blank project.

If you need help setting up your Galileo, check out the beginning of our post on connecting a potentiometer to the Galileo. 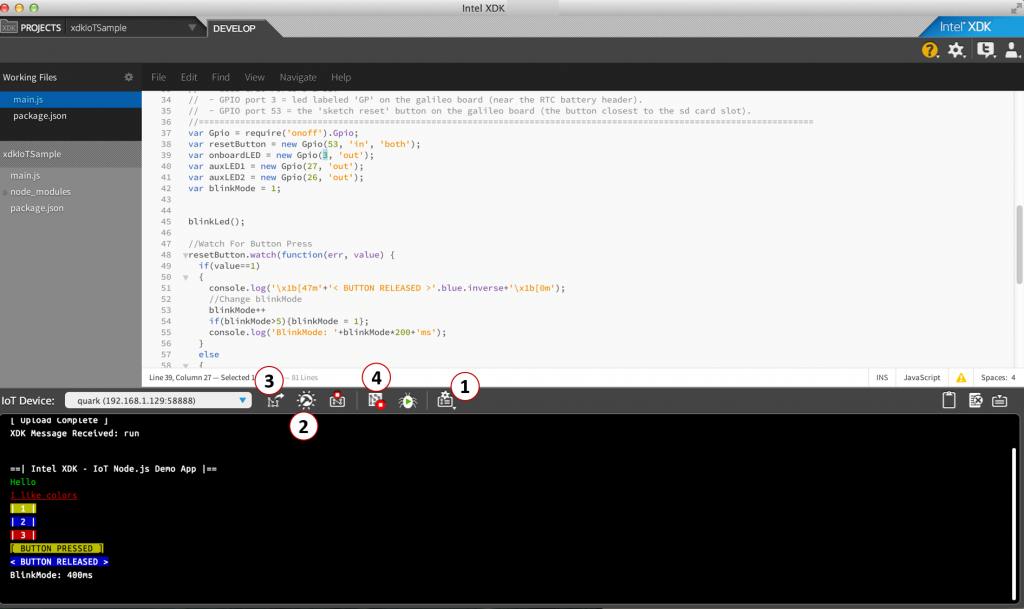 In the package.json add PubNub as a dependency:

Then click Install/Build. This essentially runs npm install on your Galileo and adds the PubNub library to your build. PubNub is the backend for this demo; it allows us to publish the accelerometer data to the internet and read it somewhere else.

We can read the accelerometer data using analog read. We’ll assign the values to x, y, and z within our javascript file.

Next, we’ll create a loop to continually read the values of the X, Y, and Z accelerations. In the following case, we store the initial values as a “zero” value and then calculate the difference.

Now let’s integrate PubNub for the real-time streaming of the accelerometer data.

The channel is the name of the room for which we’ll subscribe to messages on the other end. The message is formatted like so because it matches the schema defined in eon-chart.

Now to render that data on our real-time dashboard.

Receiving and Visualizing the Data on a Dashboard

Now to create an HTML webpage to render the real-time dashboard. We include the eon framework in the head of the page, and that’ll take care of connecting to PubNub and creating our chart. Easy huh?

Create the chart with the following function. We supply the same PubNub channel the Galileo is broadcasting from (pubnub-intel-gal-demo-xyz) and render the data in a bar type chart. EON-chart subscribes to that PubNub channel, renders the chart, and updates it when the value changes.

Try it out! Load this page up in Chrome and move your accelerometer around.

That’s it! Now you’re Galileo is broadcasting it’s information over the internet (via PubNub) and into a webpage. You’re probably loading the page locally, but it can be hosted anywhere and it’ll still work all the same.

You can extend this demo by adding more charts, more analog inputs (a potentiometer, buttons, light sensors, etc), or even adding more microcontrollers. You can even use PubNub to allow one Galileo to talk to another Galileo, or command them all from a centralized control panel!

If you want to learn more about all the things you can do with the EON framework and PubNub, check out the video below!