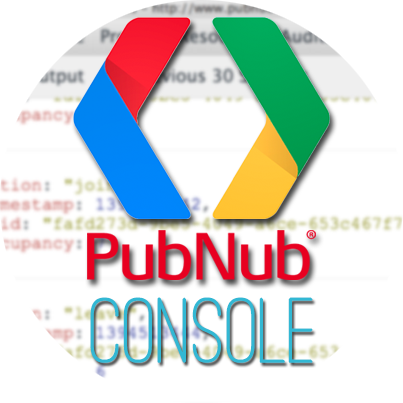 We’re happy to announce that we’ve released a number of new features and upgrades to the PubNub Console for Google Chrome. We released the extension just last month and have already made numerous improvements to the interface.

First, you’ll notice an overall improved styling of the console, as well as a shiny new PubNub logo in the toolbar for aesthetics.

The most requested upgrade (by the PubNub team themselves) was the ability to see exactly when a message was published or received. You can now see the date appear next to the message type.

We’ve also added the ability to filter the type of messages you see in output. Now you can choose to see only “publish” or “subscribe” type messages from a pulldown in the toolbar.

Next, we added a here_now shortcut to the toolbar. When you click this button you’ll be able to see a list of all UDID’s currently subscribed to the channel.

Finally, we’ve added sparklines next to channel names so it’s easier to see which channels are receiving messages right now. The sparklines graph messages published + subscribed over the past 10 seconds.

Did we miss something? Let us know what kind of improvements you want to see in the PubNub Console for Google Chrome! Tweet @PubNub or contact us.

Need more help with the PubNub Console for Google Chrome? Check out our how-to video below: