This tutorial will cover how to build a simple chat application using modern component-based design in React.

Modular chat kits, powered by PubNub, make it easy to build the type of chat you need for your application. They include a framework for sending and receiving messages, group and 1-to-1 communication, user presence and activity status, and a path forward for expanding with more features and functionality. These open source kits can be used to build chat rooms for applications like live events, HIPAA compliant doctor patient messaging, and more.

This tutorial will cover how to build a simple chat application using modern component-based design in React. React offers an easy way to group UI elements into components. A complete chat application can go from having dozens of UI objects to just a few UI objects using components. Once you use chat components, you’ll have a flexible chat solution that can be reused anywhere easily.

Each component is designed to be reusable, expandable, and easy to use in another React application. Simply edit the CSS and layout of the open source React components to your liking. Anyone can build a robust chat app by using this tutorial and these components as a starting point. 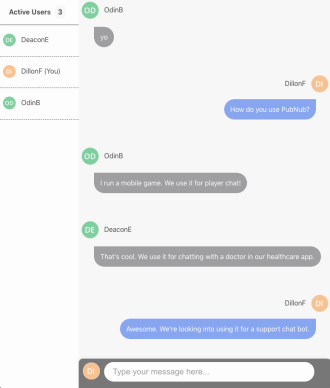 What backend API should you use for chat apps?

Before we jump in to the rest of the tutorial, it’s a good idea to figure out what will power the backend of our chat app. This tutorial is an example of how to integrate open source React chat components, with PubNub powering the backend as the chat API. We’ll use PubNub for reliable message deliverability, presence indicators, and other chat-related data so that the React-based front end components can update in real time as users send and receive messages.

PubNub is a great backend API for chat because it offers a lot of functionality. Some key advantages are:

Getting started with React and Typescript

Now that we know what backend we are going to use, let's review React and Typescript. React is the most used framework used by developers to develop web apps. TypeScript is a type safe language built on top of Javascript. TypeScript is now the new standard in the React world as it offers more functionality over Javascript.

You can still follow this tutorial if you’re not familiar with React or Typescript. We’ll provide all the steps you need here to get started with these open source React chat app components.

The React docs provide a few great ways to get started learning React that are flexible with various common learning styles. There’s also a complete React Overview and Walkthrough by Tania Rascia if you’re looking for a comprehensive guide to React in detail.

After reviewing React and Typescript, we need to set up the tools necessary to build a chat application in React.

Set up a Node.js development environment

If you’ve already installed Node.js, you can skip to the next section.

Next, we’ll check the installation. Open your terminal and run the following commands to ensure Node.js is installed:

You should see a version number after you run these commands.

You need Git to clone the React project from GitHub.

If you’ve already installed Git, you can skip to the next section.

Even if you have Git installed you may want to ensure that it’s the latest version. To do that follow the Getting Started - Installing Git guide.

Next, we’ll check the installation. Open your terminal and run the following command to ensure Git is installed:

You should see a version number after you run the command.

Setting up a backend for chat app components

To begin our tutorial on how to build a chat app using React, we’ll first, set up the backend we’ll use with our chat components. The end result will be two APIkeys that you’ll use in your React chat application. A PubNub account and API keys are free.To set up your backend:

You’re ready to get started building with the Simple Chat Chat Kit repo.

Navigate into the repository. From here we’ll run and test the chat application.

Now you need to configure the components with the API keys you obtained from the PubNub dashboard. These keys allow you to send and receive messages on the PubNub network. You must also enable the Channel Presence feature, the Storage and Playback feature, and the Stream Controller feature for your API keys for the chat components to work properly with full functionality.

Now you can run the project and try out each of the components.

The React app should now open a html webpage at http://localhost:8080.

Let’s review the component structure now that you’ve tested the Simple Chat Kit. This chat application includes 3 components that are critical for most chat apps. Each of these components work together to provide a complete chat experience. These components allow you to build more functionality to customize them to your needs.

Now that you have tried out the chat UI and have an idea of how the React components function together to create a complete chat experience, let's break down how each of these components work and how you can modify them.

This component outlines the structure for the majority of the application. If you navigate to the file src/components/ChatDemo/ChatDemo.tsx you’ll find the component structure. Notice how there are two main sides to this chat application: the active users component and the message list component.

This component aligns the ActiveUsersList component.

This panel also has an area to display the current user avatar. This avatar url is generated in src/AppStateContext.tsx when the initial state is defined from the name created by the generatedName() function. Consider this a placeholder for where you could provide a way for users to set custom avatars or use a popular avatar service like Gravatar.

There’s a function for handling key press events that dispatches the SEND_MESSAGE function declared in the src/AppStateContext.tsx file.

The SEND_MESSAGE function publishes the contents of the input field to the current channel defined in state. This is publishing a chat message. In this app there’s no changing channels. You’re only sending and receiving messages to the ‘global’ channel. The sender’s name, defined from the name created by the generatedName() function, is also appended to the published message.

The message list component can be found in the src/components/MessageList directory. If you open the file MessageList.tsx you’ll see that the component returns a list of messages from the messages in the state.messages array and scrolls to the bottom.

The Message subcomponent can be found in the src/components/Message directory. If you open the file Message.tsx you’ll see that messages are conditionally formatted depending on if you sent or received the message. Each message is formatted with an avatar (generated from the message sender name), the sender name, and the actual message.

The state.messages array is managed by the src/AppStateContext.tsx file. At the start of the application the history is requested from PubNub for the channel defined in state. In this app there’s no changing channels. You’re only sending and receiving messages to the ‘global’ channel and so we only need to get the history for the ‘global’ channel. Consider the following code:

Newly received messages from the subscription are received by a PubNub listener callback.

The active users component can be found in the src/components/ActiveUsersList directory. If you open the file ActiveUsersList.tsx you’ll see that the component returns a list of active users from the uuids in the state.activeUsers array and shows a count of the current occupancy in the header. The UUID for a user within the PubNub network is set to the same as the generated name in state for each user. This way you don’t need any additional information to visually display who a user is (no API lookup necessary).

The ActiveUser sub component can be found in the src/components/ActiveUser directory. If you open the file ActiveUser.tsx you’ll see that user names are conditionally appended with “(You)” depending on if the user being listed is you. Each user name is displayed with an avatar generated from the UUID / user name.

The state.activeUsers array is managed by the src/AppStateContext.tsx file. At the start of the application a hereNow call is made to PubNub for the current channel occupants. We only need to get the occupants for the ‘global’ channel.

What other features can I add to my chat app? 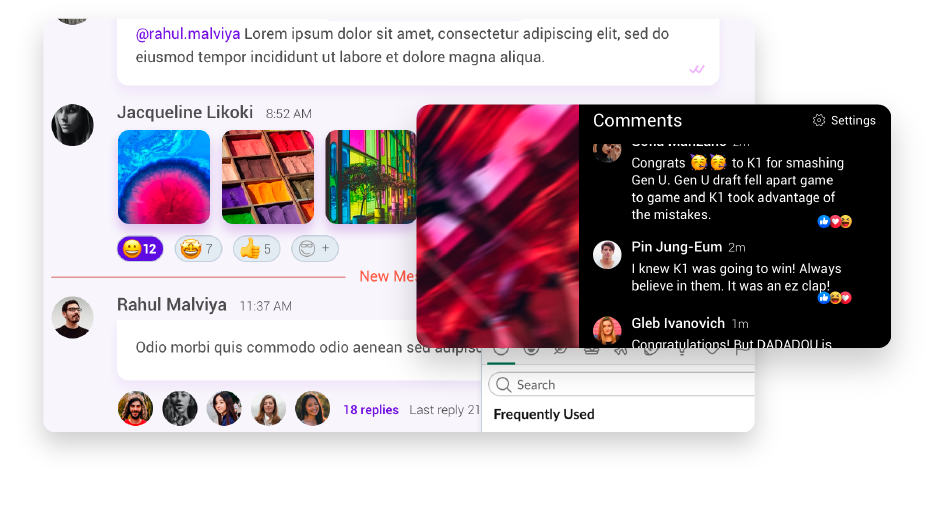 Now that you have a complete open source chat web application, you can expand on it with more messaging features and customize the CSS. There’s a ton of room for customization, so consider the components of the React app discussed in this article as a template. You can expand further and use PubNub’s Chat UI to build functionality into your application like:

Find the PubNub SDK that’s right for your application and then check out these great chat resources to start building:

Want to get started building live chat or messaging into your app today? Get in touch with our sales team to quickly get your in-app chat up and running.